Take a step back in time and see if you can recognize the locations in these seven old photos of Melbourne.

Melbourne at the crossroads

Can you guess where this intersection is? Here’s a hint. If the photo was wider, you’d see Melbourne Town Hall on the bottom left. That’s right, it’s the Collins and Swanston Street crossing, and was taken in the early 1960s. Look how everyone is following the rules by keeping to the left. There are even arrows on the road to guide pedestrians. Some classic Holden cars are chugging past, and just about everyone is wearing a hat. 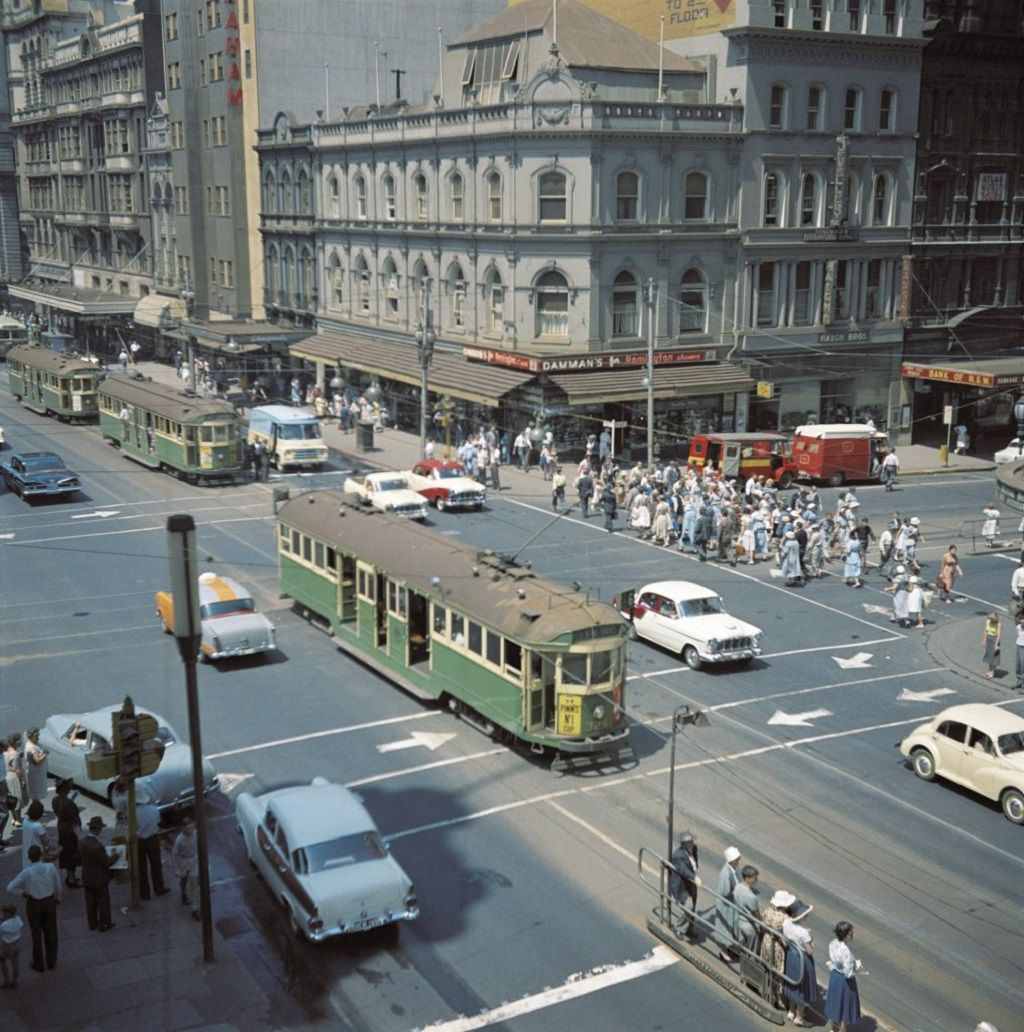 Look how much Lonsdale Street has changed since the early 1960s. There’s no pedestrian bridge and no Emporium Melbourne in this picture. But you can see the vertical Art Deco lines of Myer Melbourne, and the clock that’s still in place. Many of the other buildings have disappeared, but Mitchell House has survived. It’s the curved Streamline Moderne building on the right. Nowadays you can head up to Level 5 to browse jewellery for men at Lord Coconut. 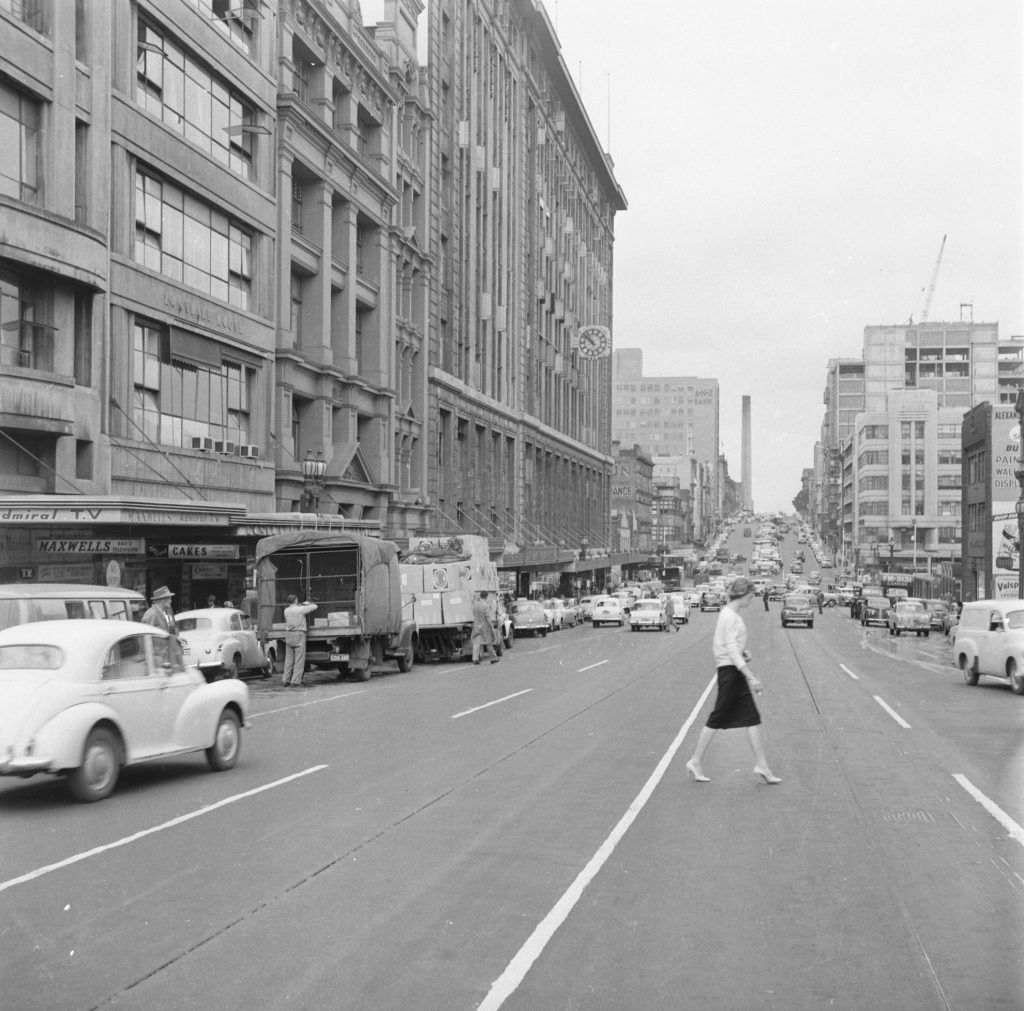 It’s home time in the late 1950s, and the five o’clock crowds are storming towards the steps of Flinders Street Station. It’s a sea of suits, handbags and hats. Princes Bridge Station is long gone today, as is the ugly brown Gas and Fuel building that replaced it in the 1960s. The site is now taken up by Fed Square and the Metro Tunnel Town Hall Station entrance. The buildings in the distance look strangely unchanged, though. You can see the Moorish domes of the Forum theatre. 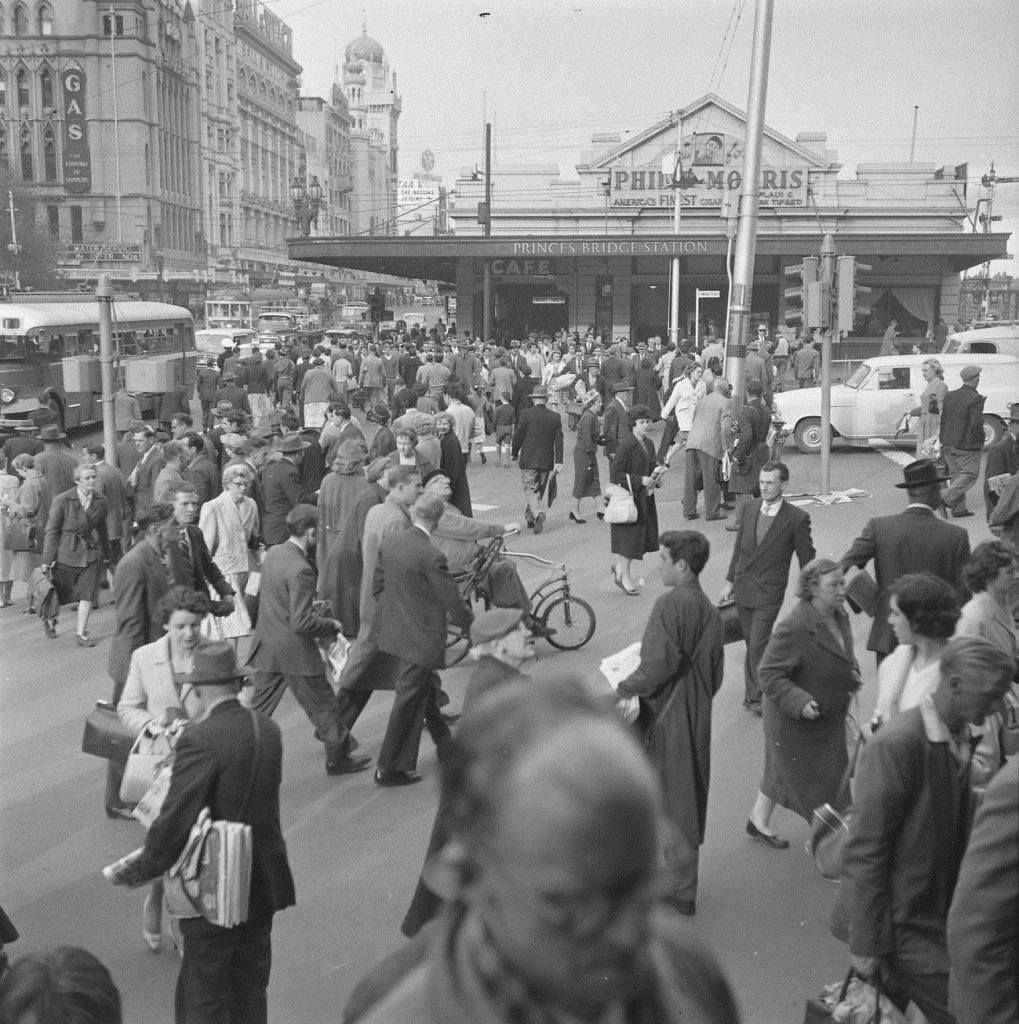 It’s now Arts Centre Melbourne, but in 1906 this St Kilda Road site was an amusement park. While ladies cooled off under parasols and big hats, fun lovers plunged into the water chute. Other attractions included a rifle range, miniature train, a Pierrot variety show and Japanese teahouse. The amusement park had a short life, just 1904 to 1909. Melbourne’s unreliable climate may have played a part in its closure. 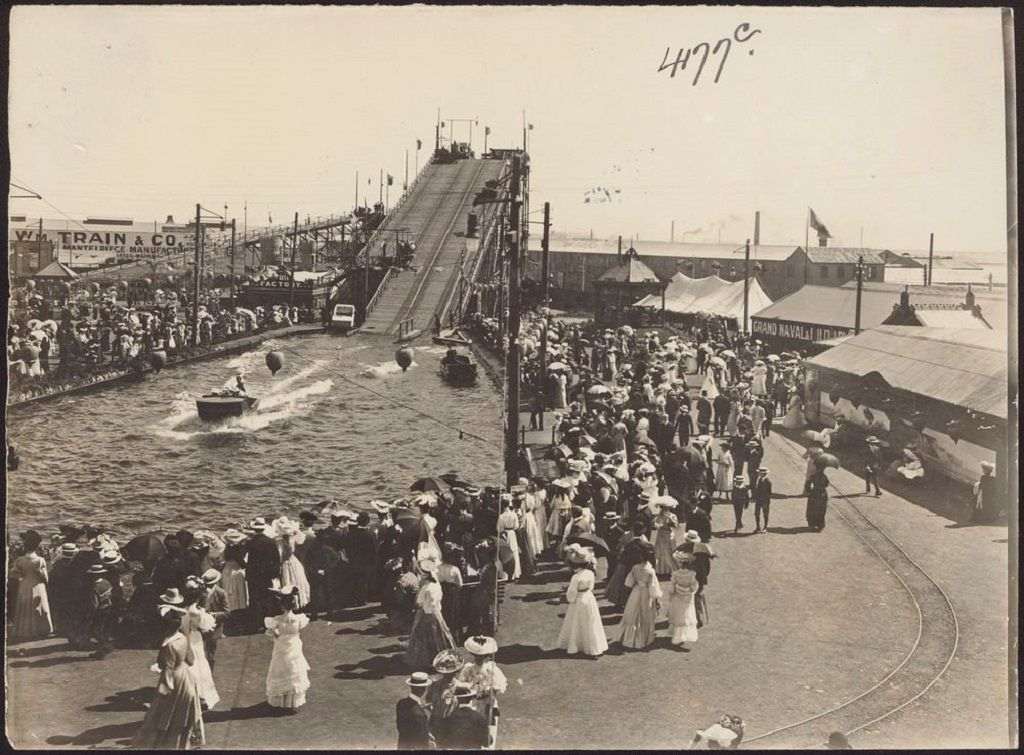 Royal Arcade set the gold standard for Australian shopping malls way back in 1869. Here it is at the end of the 19th century when gas lighting was the go. You can’t see Gog and Magog in this photo, though they were installed in 1892. The glass roof, cast-iron arches, semicircular windows, ornamental scrolls and glass-fronted shops. They’re all still in place. Drink it all in when you visit the arcade to pick up a new pair of Italian-made shoes from Habbot. 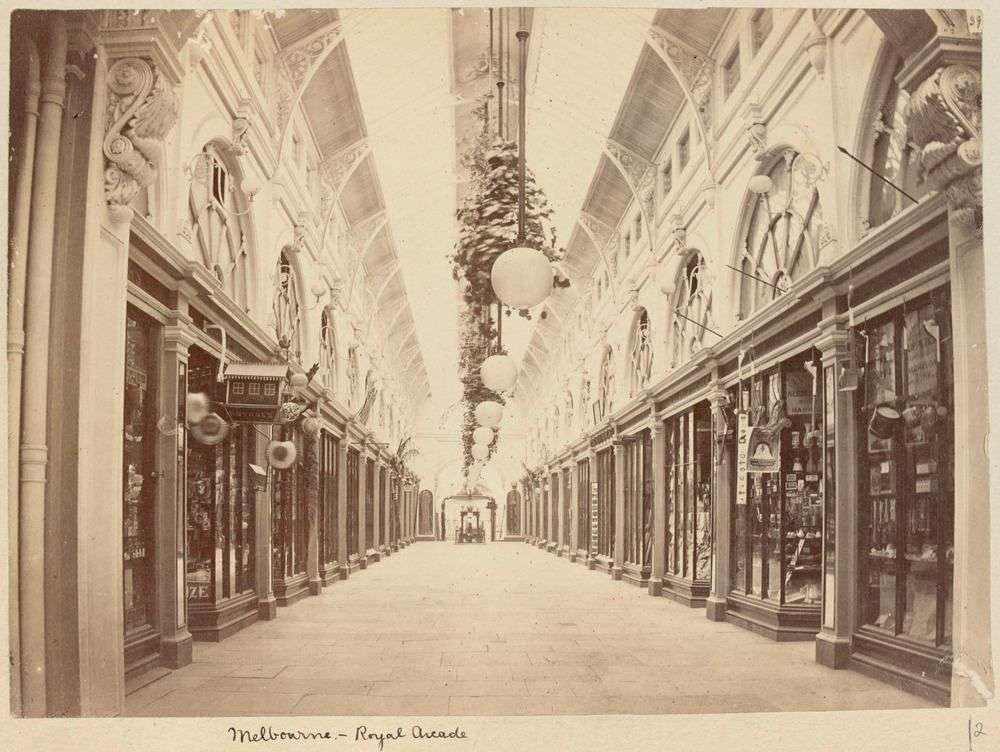 If you were shopping for watermelons or pineapples in the early 1980s, Queen Victoria Market was the place to go. These days the produce is more varied, but you won’t find a melon for 20 cents any more. And could that be String Bean Alley on the left? Queen Vic is the largest and most intact of Melbourne’s 19th-century markets, and it’s been around since 1878. 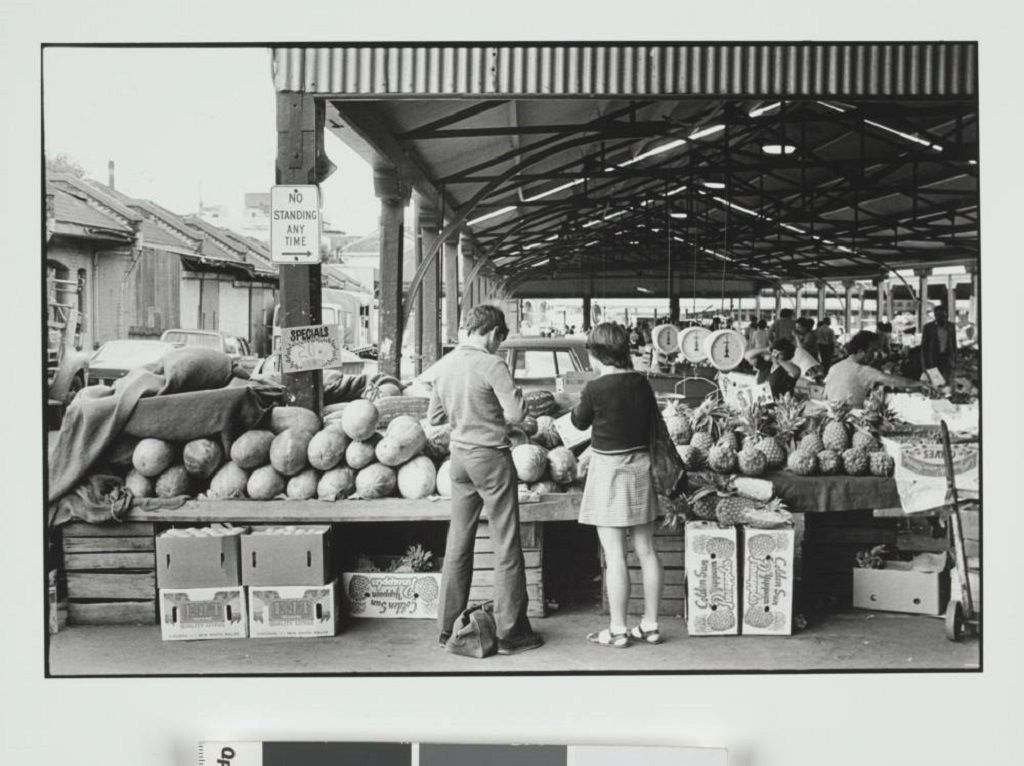 Swap cards. Whittling. Patchwork quilting. Toothpick art. Some hobbies may have changed over the decades but not so model planes, ships, cars and railways. Hearns Hobbies has been pleasing lovers of model kits since 1947. Now its range has expanded to include radio-controlled drones and ’copters. 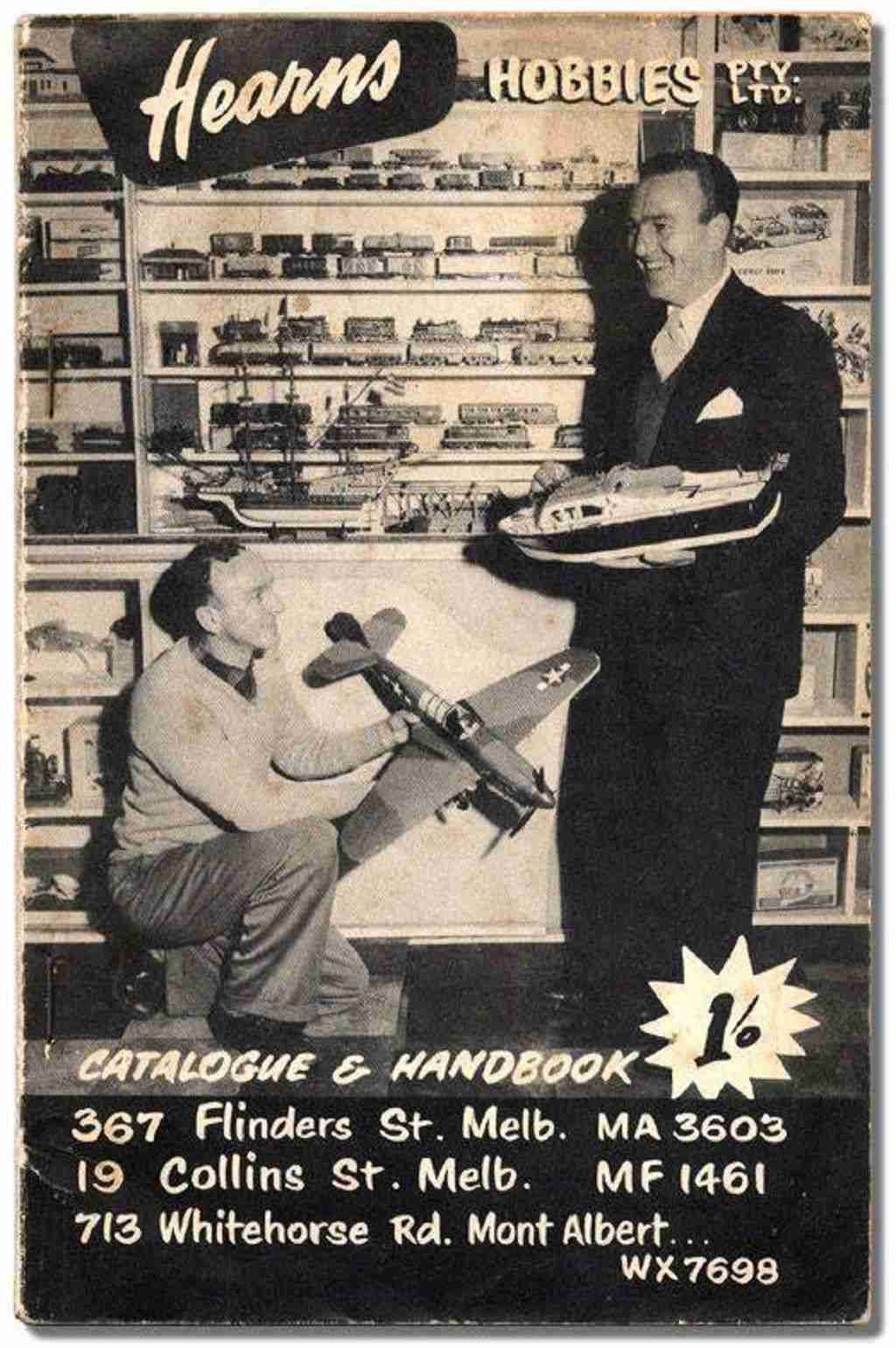