Rooftop gin gardens, foodie festivals and beachside pop-ups. The city’s hotting up and bursting at the seams with summer scenes. 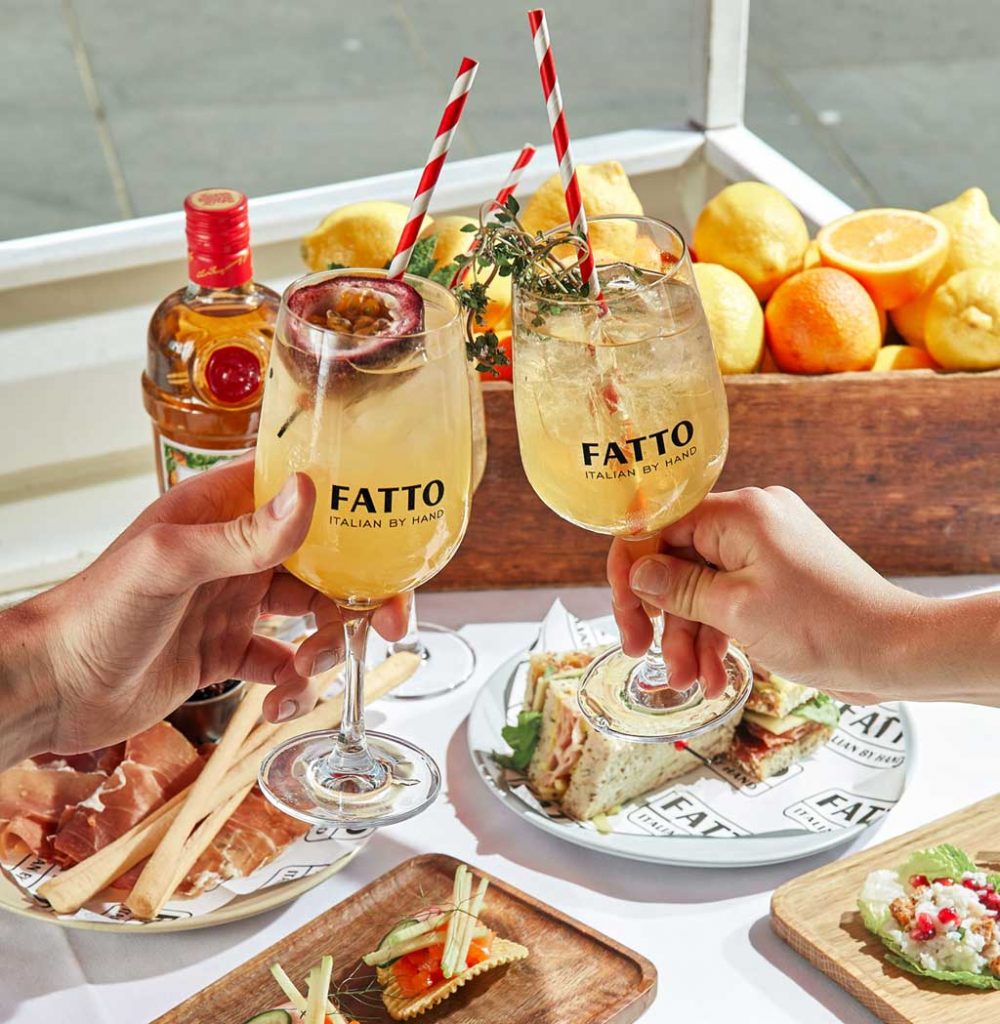 Cool off poolside with a Prosecco in hand. Adelphi’s iconic Weekend Summer Sessions are back and hosting a pop-up Aperol bar on the rooftop until 1 March 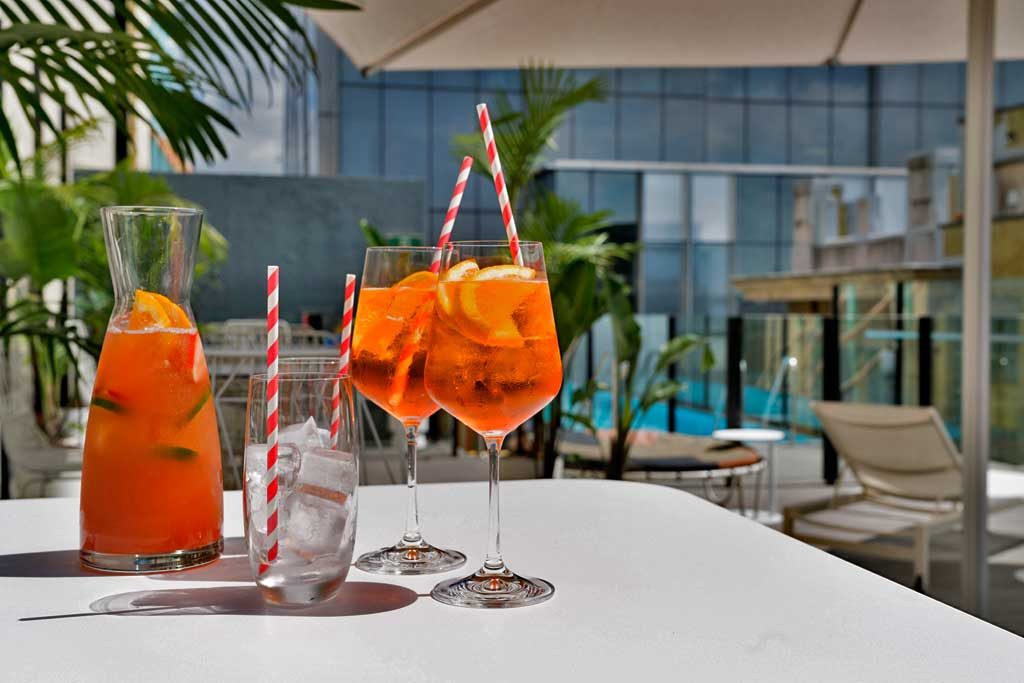 Feast your eyes on the living street art scene, boogie to live tunes and sip espresso martinis when more than 100 artists take over four bars, four stages and four floors with electric urban art. At The Facility, Kensington. 20 to 29 February. 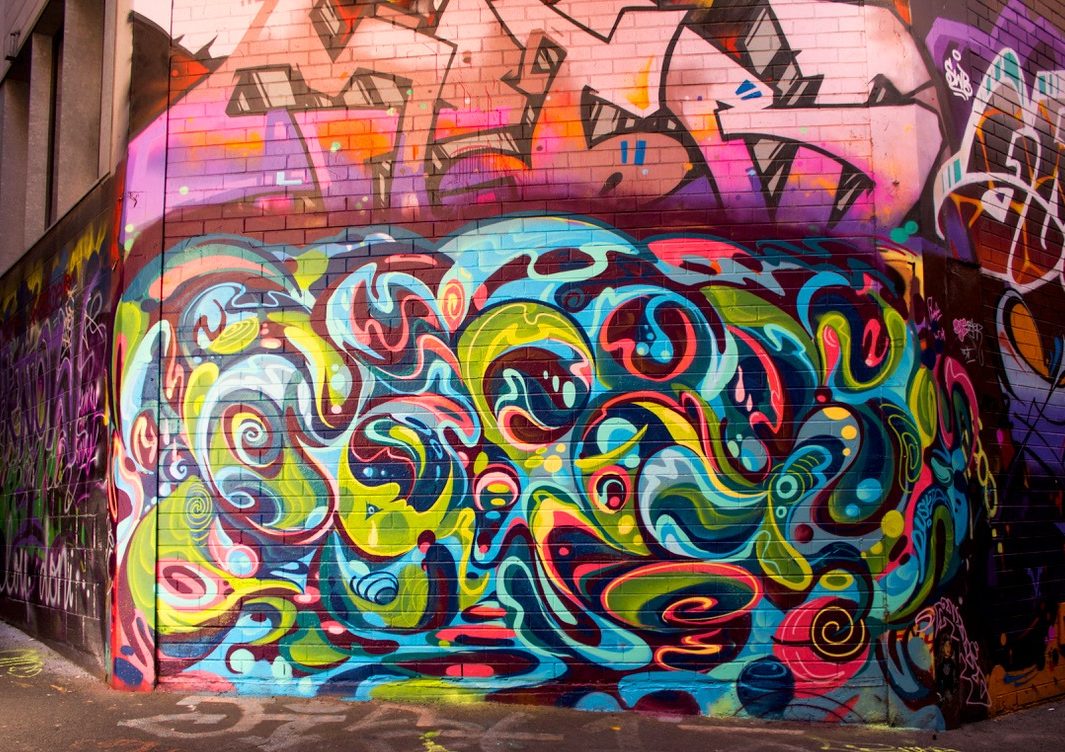 Munch on street food favourites like Gyoza, teppanyaki barbeque and okonomiyaki pancakes at the Japanese Summer Festival. Dance the Bon dance and play yo-yo toy-fishing. Cool off with a shaved ice or a chilled Ashai by the pop-up bar. Free entry. 23 February at Fed Square.

Soaring beach boxes with the star

Forget the ground level huts in Brighton and take to the skies this summer. The Melbourne Star’s Beach Box pop-up returns for another season of flying refreshments. Sip rosé, feast on share platters and watch the best views of Melbourne go by. 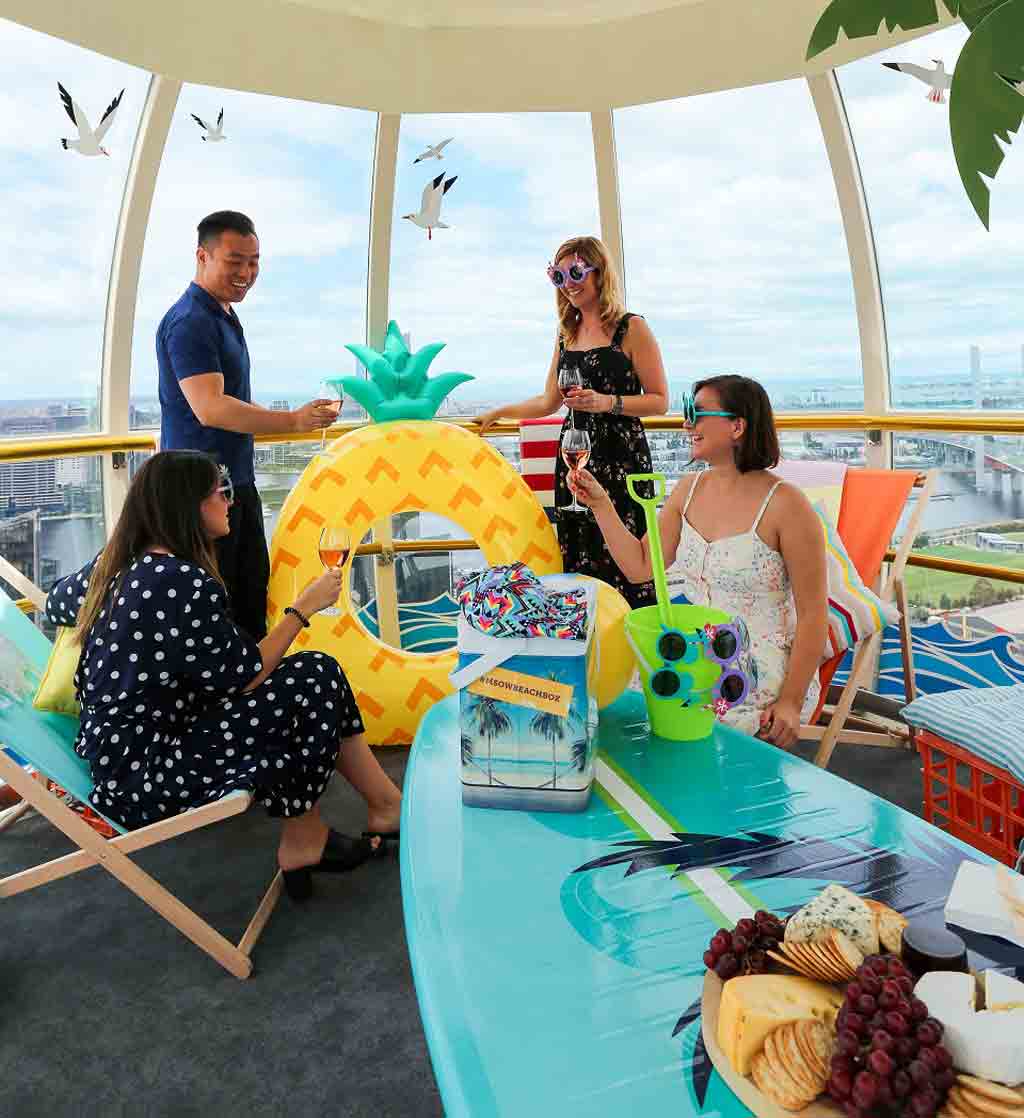 Shop the cream of the (organic) crop, go green and stock up on tips and tricks for climate crunch time. National Sustainable Living Festival takes over the city with more than 300 talks, workshops and performances. 1-28 February.

Browse the artist stalls, feast on food truck fare and boogie to live tunes at the Northside Summer Festival. 15 to 22 February at Eades Park.

Feast on fresh souvas, barbecued octopus and Lukumades doughnuts and Zorba ‘til you drop, at the massive 33rd Lonsdale Street Greek Festival. 29 February to 1 March.

Recline with a picnic and wine for a summer screening under the stars at Moonlight Cinema. Stock up of food-truck fare and tipples from the bar or go Gold Grass for a premium view and plush bean bed. Until 29 March at Royal Botanic Gardens.

Spend a balmy evening watching Movies Under the Stars. Get in early to nab a free bean bags for screenings of Crazy, Stupid, Love and The Lion King (2019). 14 to 15 February at Point Park, Docklands. 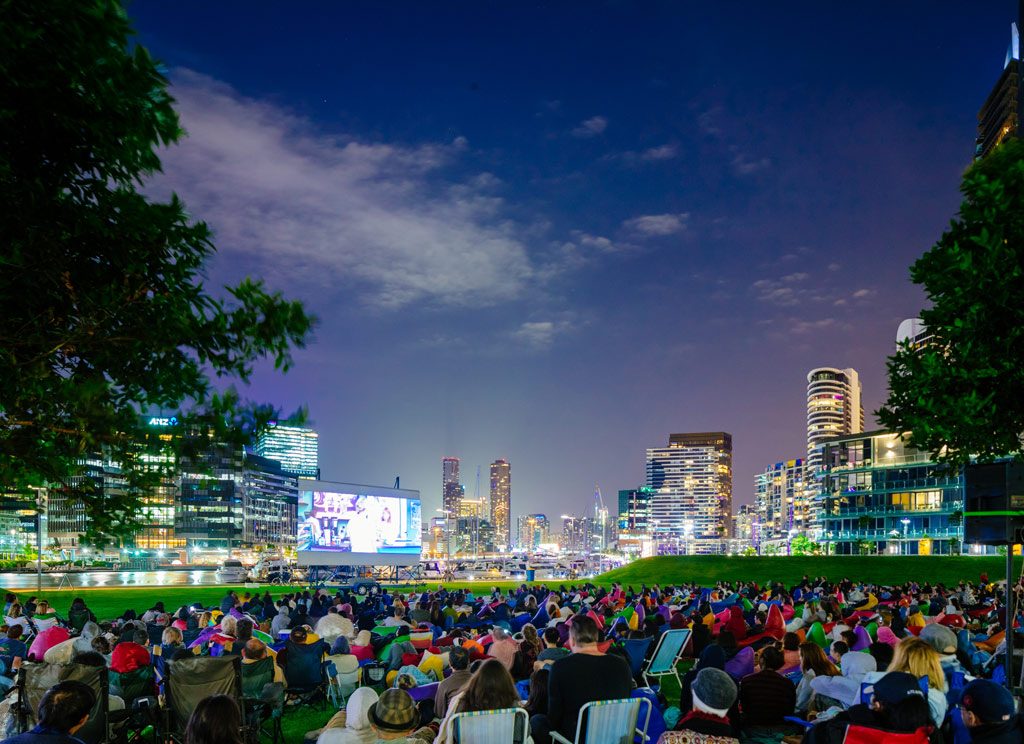 Cinema at the ‘G

Pack your pillow for mammoth screenings on the scoreboard at Cinema at the ‘G. Secure your spot on the hallowed turf for Rocketman or Ride Like a Girl. 14 to 15 February at the MCG.

From 7 February, Fed Square is being transformed into a huge sandy beach, complete with deckchairs, cabanas and live music. There’s also a season of open-air cinema screening cult summer films including Puberty Blues, Surf’s up, The Notebook and The Goonies. The Fed Beach season runs 7 to 20 february.

As dusk descends, Melbourne’s menagerie fills with the sounds of summer. Check out the Zoo Twilights’ 2020 line-up of chart-toppers and indie darlings. Fuel up on craft brews and street food to support the endangered Mountain Pygmy-possum. 24 January to 7 March at Melbourne Zoo. Be quick as many shows sell out in advance – check the program online to find out more. 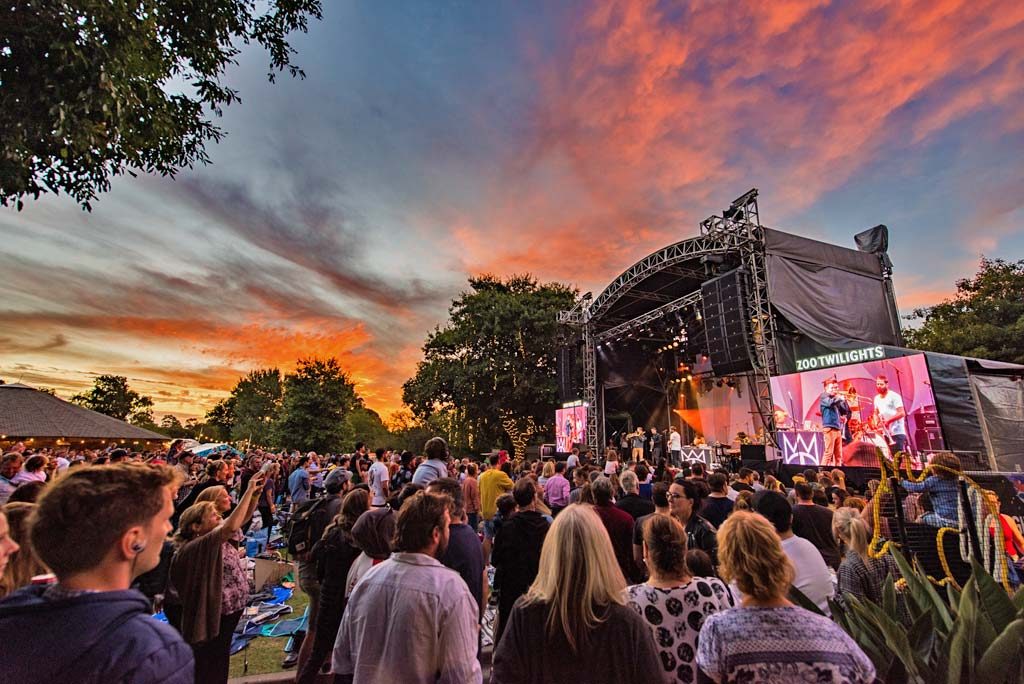 Enjoy an unforgettable night being serenaded under the stars by a live symphony orchestra. Hear new works and classics like Beethoven’s Ninth Symphony at the MSO Sidney Myer Free Concerts. 5, 8 and 14 February.

Roam art after hours at Keith Haring | Jean-Michel Basquiat: Crossing Lines. Stop by the downtown bar for NYC street snacks and get down on the 80s dance floor as DJs spotlight MTV music moments at NGV Friday Nights. Until 10 April at the National Gallery of Victoria

Slick your hair and wear your buckle shoes to paint the town. Catch mega musical Chicago and sip your sidecar, prohibition-style, at the speakeasy pop-up bar. Until 21 February at Arts Centre Melbourne. Drop by the prohibition-inspired Speakeasy at the Barre post-show for classic cocktails and a delicious menu of oysters, naked fried chicken and American style pizzas.

Pack a picnic, grab a drink at the kiosk and catch free live music, yoga, art workshops and talks during MPavilion’s summer program.  Until 22 March at Queen Victoria Gardens.

Are you Ready to Take the Law into your own Hands

Mamma Mia meets The Fast and the Furious, Are You Ready To Take The Law Into Your Own Hands is a neon-drenched, action-musical satire, set to 40 years of Filipino pop. 26 to 29 February at Arts House.

Sip chilled cocktails at the new Palm Springs bar. Browse the stalls while you much on street food skewers. Stay for live music and a game on the pop-up volleyball court at the iconic Summer Night Market. Wednesday until 11 March. At Queen Victoria Market.

Sunday at the Baths

Float along as live local acts provide the soundtrack to your Sunday at the Baths. DJs will spin everything that sounds smooth in shades and while the kids play on giant inflatables. Until 23 February at the Carlton Baths.

Sneakerheads – find your new fave indie labels at the World’s First Streetwear Supermarket. Watch live street art and the 3 x 3 basketball tournament, get (flash) inked and learn how to start a brand. 15 to 16 February at Meat Market.