Melbourne’s laneways are empty right now, and the crowds of street art admirers have gone home. Here’s a reminder of the murals waiting for us when our open-air art galleries open up once more. All photography featured was captured for What’s On by Ray of Melbourne at the end of June.

To see Kaff-eine’s signature style, look for her Queensberry Street mural. The figure with the head of an animal skull is pure Kaff-eine. Her strong social conscience stands out in her work. Style-wise, she’s moved from storybook characters to edgier photorealist portraits. 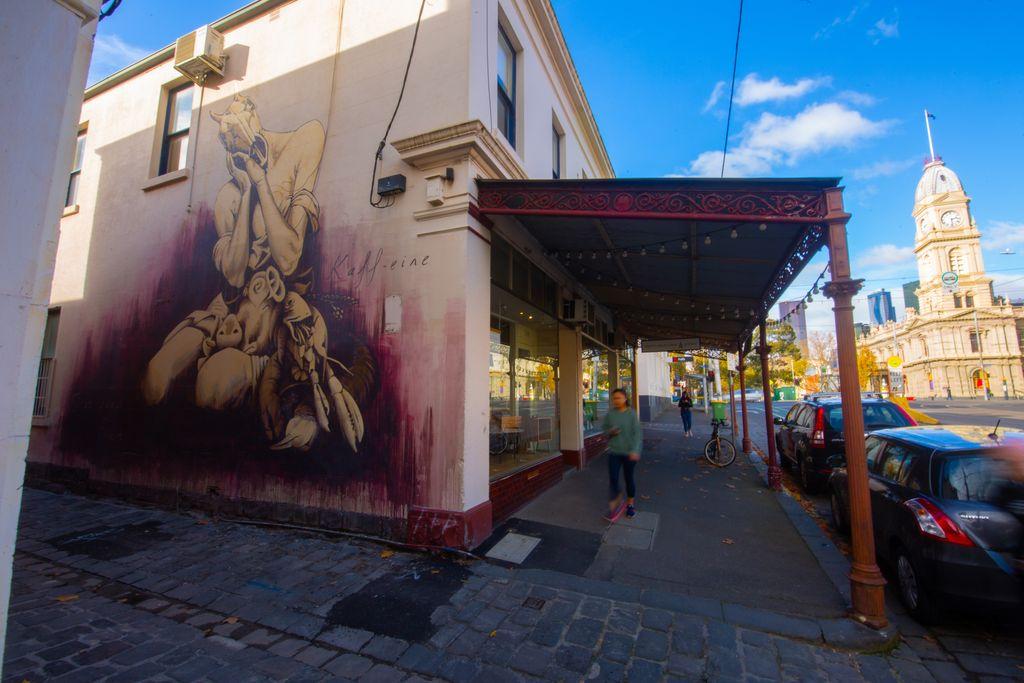 Melbourne’s first official street art precinct was launched in December 2017. You’ll find it up on Spencer Street, opposite Southern Cross Station. The precinct was curated by the Juddy Roller collective, with the help of six huge names from Melbourne’s street art scene. Adnate, Dvate, Fintan Magee, Rone, Smug and Sofles. The venue is an old power station, the perfect easel for these large-scale graphic murals. From Dvate’s orange-bellied parrots to Rone’s massive muses, the curated artworks are photorealist gems. There are also a couple of Smug standouts. Look for the enormous portrait of his grandparents. 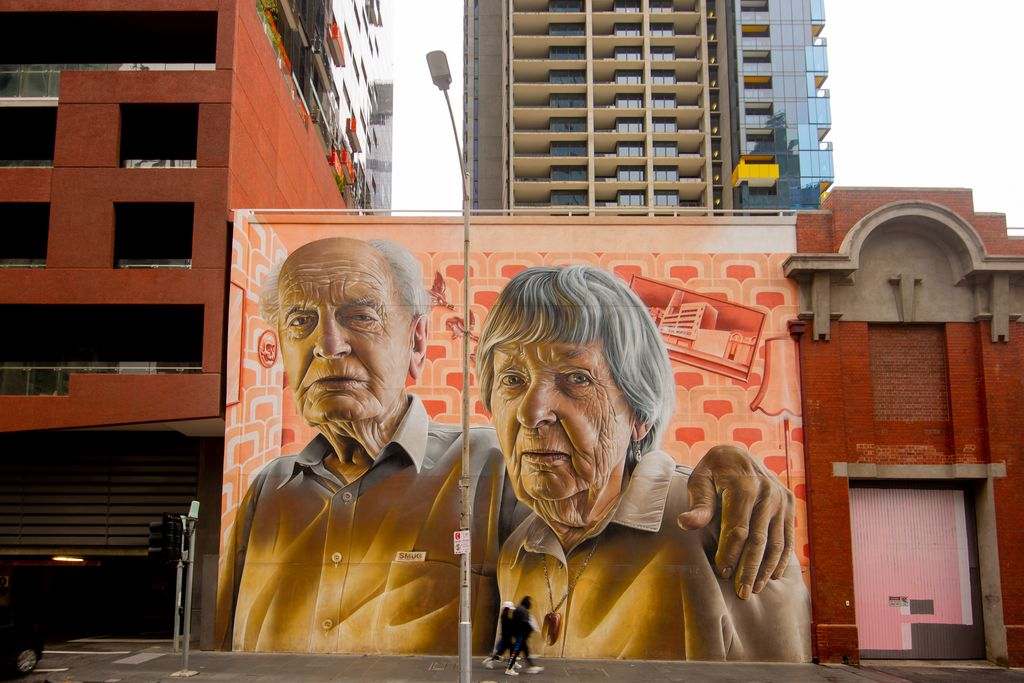 Melbourne’s most photographed cobbled laneway is usually jam-packed with selfie-stick-wielding visitors. It’s the mother lode of Melbourne street art, an attraction since 1998. This is a shifting canvas, though, with graffiti disappearing and appearing overnight. Perhaps the most memorable is the Indigenous boy by large-scale spray-paint artist Adnate. To see his 23-metre-high realist mural, look up. 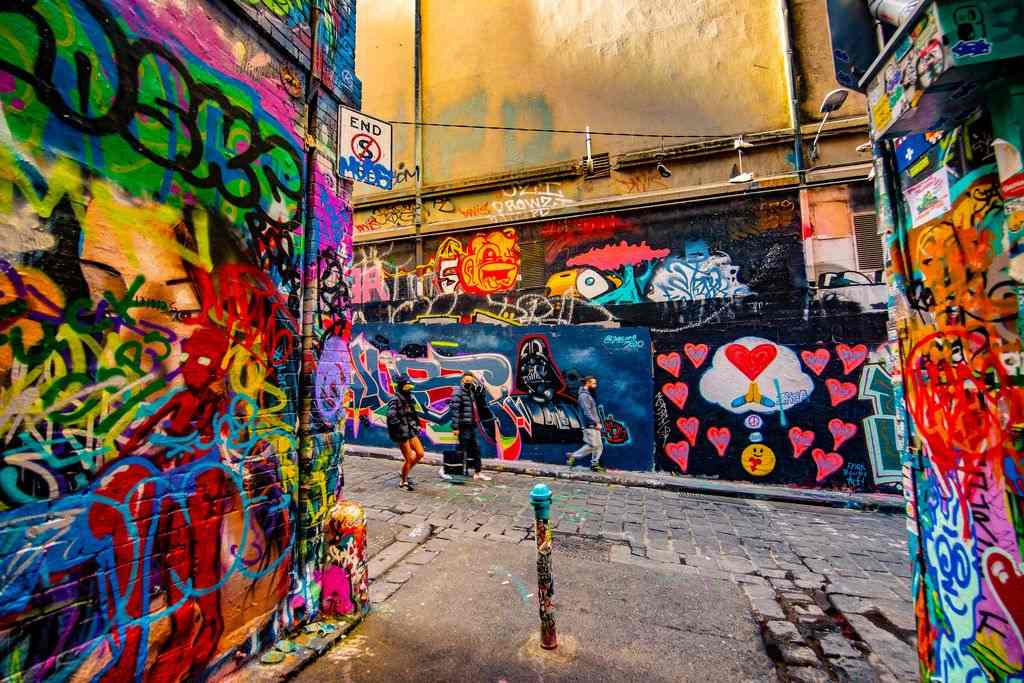 Degraves Street was one of the first laneways to grab the spotlight. It’s got the architecture, the tucked-away location, the cafes and the street art that say Melbourne. Amongst the sticker and stencil art, look for the semicircular artwork. It’s by the subterranean entrance to Flinders Street Station. This distinctive mural of neon-coloured diamonds and peaks is by street artist Vexta. It’s been here since 2017. 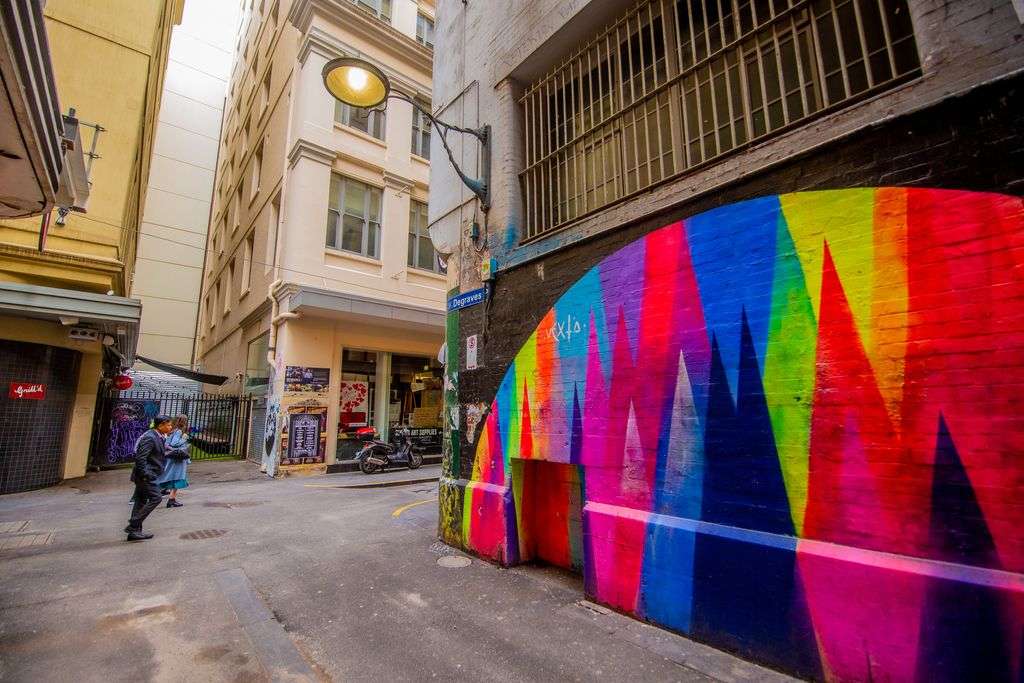 Tiny Caledonian Lane runs between Lonsdale and Little Bourke Streets. The alley has been a street artists’ favourite for years, and it hosted the original St Jerome’s Laneway Fest. Right now it’s scored a series of murals commissioned by various gaming developers – right outside Fortress Melbourne, a brand new games entertainment venue. No surprise, they depict characters from video games and esports. The technicolour artworks cover entire buildings in the alley. As you enter the laneway, you’ll pass the fiery heroics of Doom Eternal. The dramatics of Rainbow Six Siege. Jim the Troll at the rear of Fortress Melbourne. The alpine wonderland of Elder Scrolls Online: Greymoor. And the final reveal, a post-nuclear Fallout. 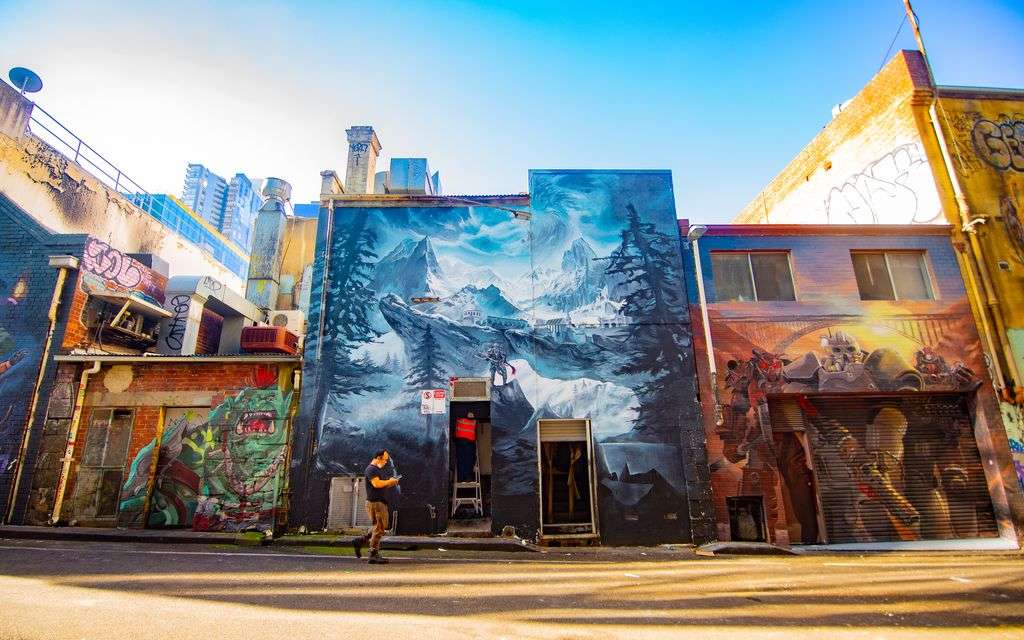 One of the artworks covering Caledonian Lane, commissioned by Bethesda Softworks.

Blender Lane is another artists’ darling. No wonder, it was the first home of urban art incubator, Blender Studios. The unsigned cul-de-sac is a whirl of tags, stencils, graffiti art and paste-ups. No space has been left untouched. You’ll find it off Franklin Street, up near Queen Victoria Market. Artists from Blender Studios run Melbourne Street Art Tours. Take a tour when they’re back up and running. It’s a great way to learn about Melbourne’s street art firsthand. 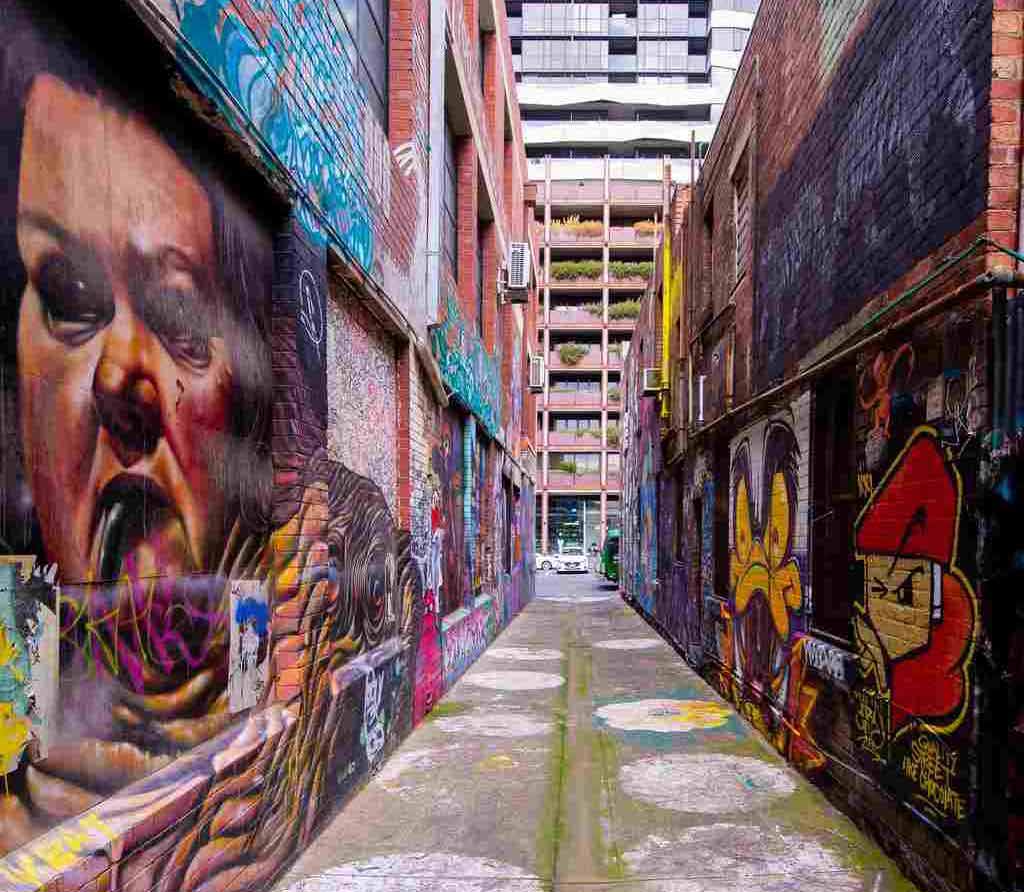 Now this really is a cul-de-sac. The industrial-chic laneway is tucked away behind mid-century factory buildings. Tags have covered some of the murals but the stencil art is still fresh. It’s also known as Baptist Place, and is off Little Collins between Russell and Swanston Streets. See if you can make out the remains of the Last Supper mural. It’s a reminder that the laneway once led to the Baptist Chapel on Collins Street. 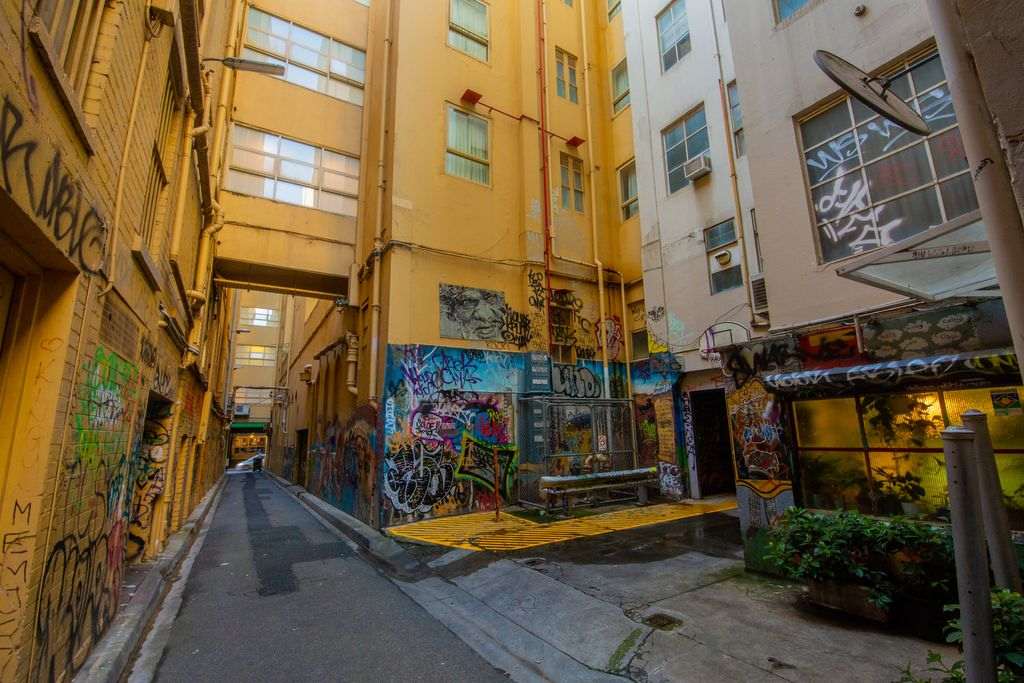 The masked mural in Southbank

We’ll end on this very timely new mural in Southbank, created by the sensational @cto.art. The piece appeared in early June and has continued to strike a chord with Melburnians throughout lock down. Thanks to Juddy Roller for sharing this photo with us. 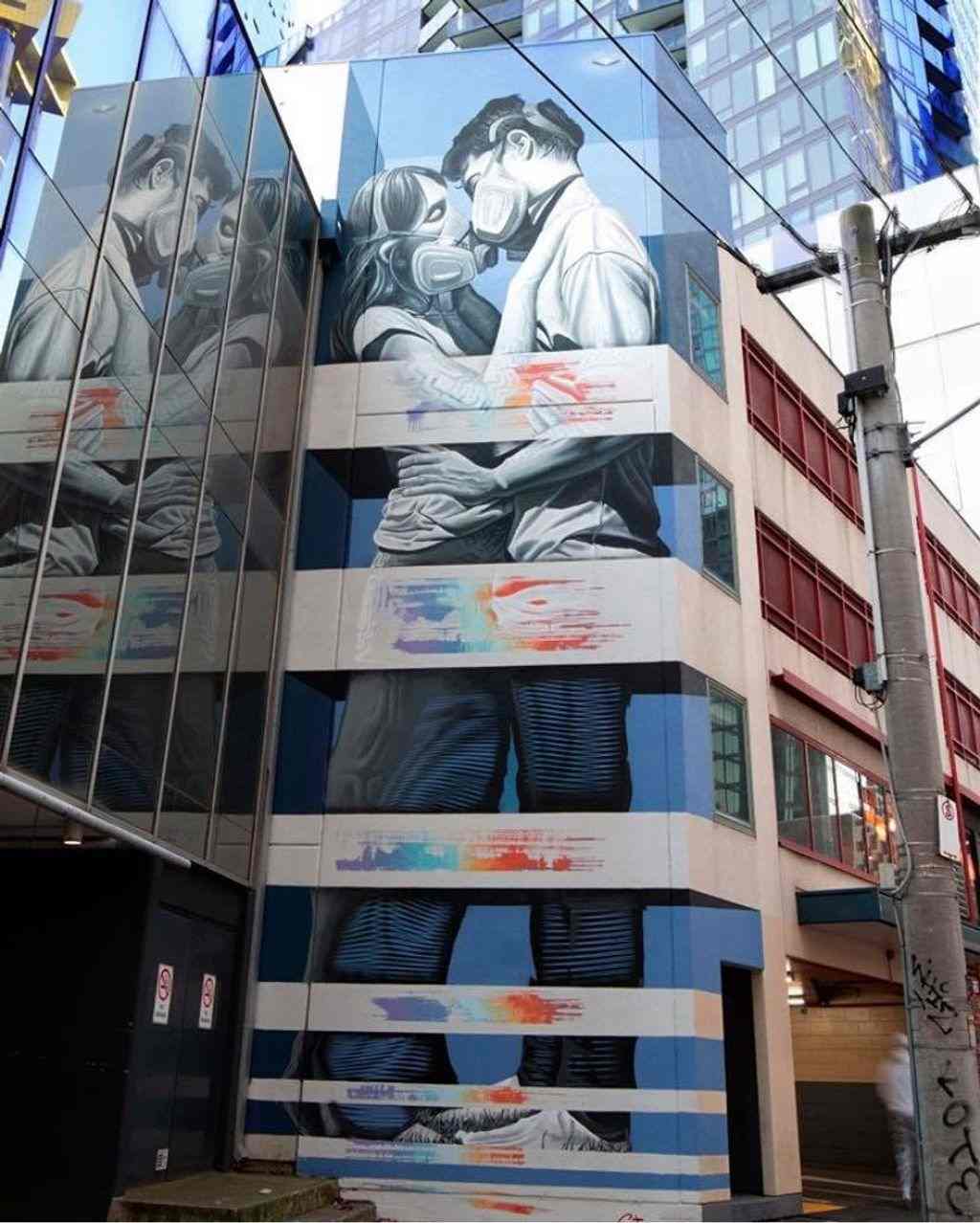