Centre Place packs a lot into a little space: street art, buskers, cafes, bars, shops and a lively, slightly grungy atmosphere. Grab a coffee from a hole-in-the-wall and see what happens in one of Melbourne’s quintessential laneways. 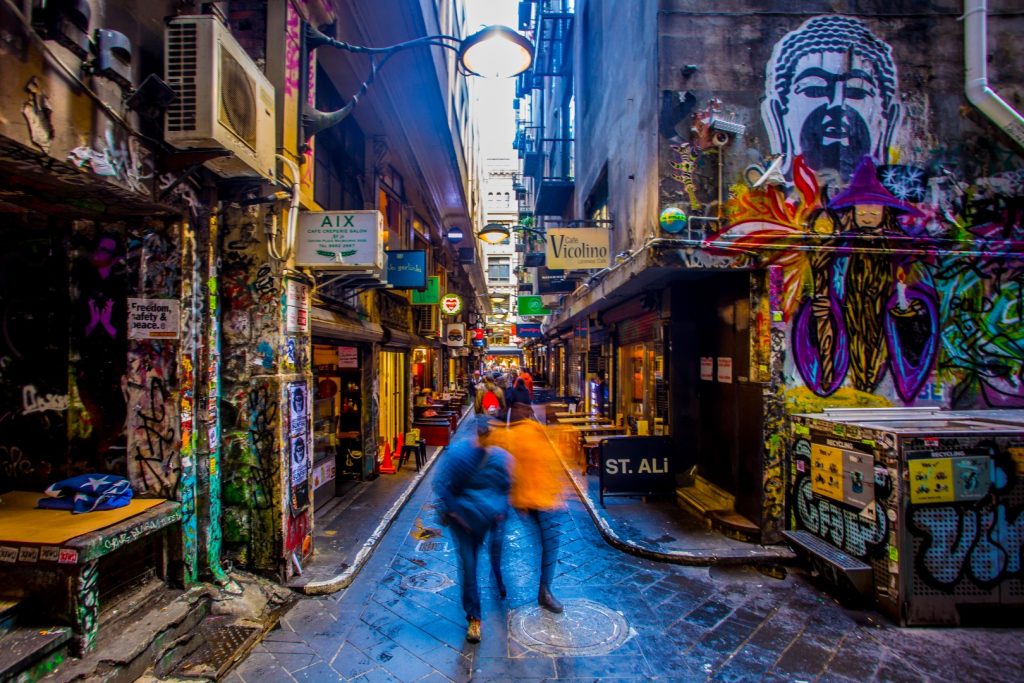 Originally called Cummings Alley until 1915, Centre Place is just a few metres wide and half a city block in length. It lies between Flinders Lane and Centreway Arcade, extending this popular pedestrian thoroughfare to Collins Street. Centre Place was among the first laneways to be revitalised by the city in the 1980s. It’s still one of the best examples of how small nooks and crannies epitomise Melbourne’s reputation for hidden treasures. Everywhere you look, there’s something to discover. An ever-evolving gallery of street art – one of the city’s best in fact – it’s crammed with stickers, paste-ups, stencils and throwies. Buskers set up in an alcove by the creperie. Punters perch on tiny seats along the narrow footpath, and on milk crates when it’s busiest. Yes, there’s a definite, playful grunginess about Centre Place.

A favourite hole-in-the-wall is B3 Cafe, best known for what may be Melbourne’s cheapest and best baguette sandwiches. From the classic ham or smoked salmon to eggplant schnitzel baguettes, you’ve got a meal for a few coins. Another hot spot is The Soup Place, whose diminutive space is centred around numerous big black pots of hearty soup. Again, it’s a meal for loose change – perhaps minestrone or potato, leek and bacon soup. For a few dollars more, buy a pay-it-forward post-it note that someone in need can exchange for a feed.
Serving a selection of fresh pan-fried dumplings, Shandong Mama Mini is a tiny eatery nestled in Centre Place. Favoured fillings include the vegan zucchini mix or mackerel with coriander, ginger and chives. 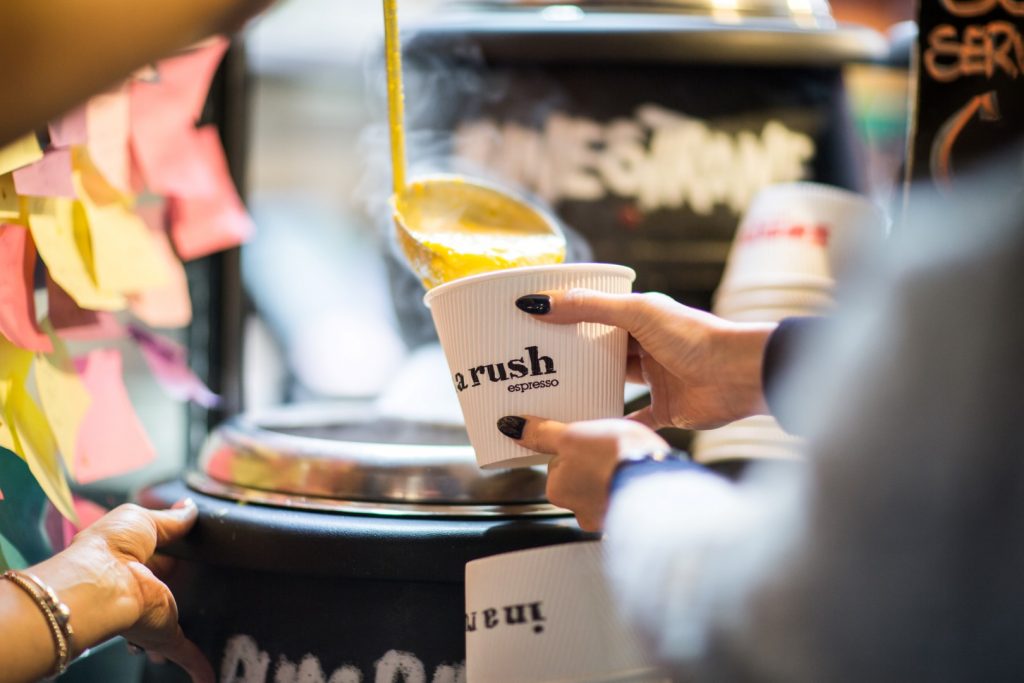 The Soup Place in Centre Place

Somehow, Jungle Juice Bar has managed to squeeze in a little interior seating. Of course it’s at a premium, so you may have to go milkcrate hunting to pause with their simple, tasty fare. Fresh juice and a club sandwich, or coffee and a New York-style bagel?

Directly upstairs is Hell’s Kitchen, where you can sit and peer down at the passing parade. Yes, you can probably sit, because compared to the neighbours it’s pretty spacious, and also retro cool. Open from lunch until late, it morphs from a cafe with Middle Eastern leanings to an intimate indie bar.

Lustre Bar is also one floor up with a birds-eye view and an afternoon-to-late attitude. It’s more swank, however, and savoury cravings are best left at the door. Dessert and booze are the priorities, including in combination: the rumours are true, they make cocktails in a cone.

For a small boutique, Kinki Gerlinki has some big, bold fashion ideas. Bright colours, striking patterns, and styles that salute the past and wave to the future are key. Wander among this shop’s clothing and accessories, including shoes, hats and jewellery, and you’ll walk out with a whimsical smile at least. More likely a bag of joy, if not a whole new look.
The vintage-inspired label Princess Highway focuses on style and easy glamour, both important features of a Melburnian wardrobe. Their offering of vintage-inspired prints, timeless styles and unique accessories is drawn from elements of 60’s mod, 70’s glamour and 90’s grunge, then combined with today’s girl.