What we love most about Melbourne are all the hidden things left mostly unknown. From curious little shops to a vertical garden and sky-high jungle bar, we’re letting you in on a few secrets.

Street art is big in Duckboard Place and its continuation, ACDC Lane. None more so than Steen Jones’ towering tribute to Melbourne, which looks like the wall’s got itself a tattoo. On a much smaller scale, there’s a parachuting rat by Banksy. These black stencil rodents used to lurk all over the central city, but this one’s among the last still visible. Can you find it? 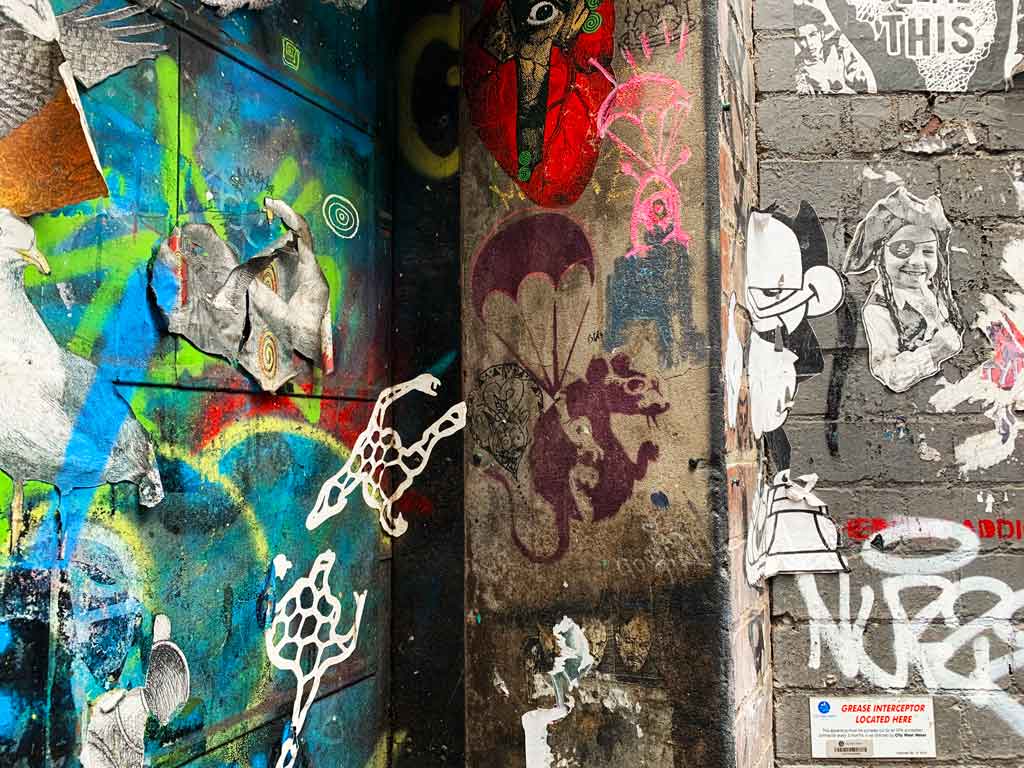 The Nicholas Building is integral to Melbourne’s reputation for fascinating hidden spaces. It’s home to dozens of eclectic studios and small businesses, including Harold & Maude. Victoriana meets goth in this unique gallery of found objects and recycled materials. Who knows what you’ll find.

The oasis in the sky

The Carlton Hotel amazes with faux velvet and taxidermied animals – including a pearl clad ostrich. Keep going up to the Palmz rooftop and you’ll be transported all over again. City towers peep through an urban jungle of bamboo and bougainvillea, which surround a tropical thatched-roof bar. It’s an instant escape from the city frenzy. 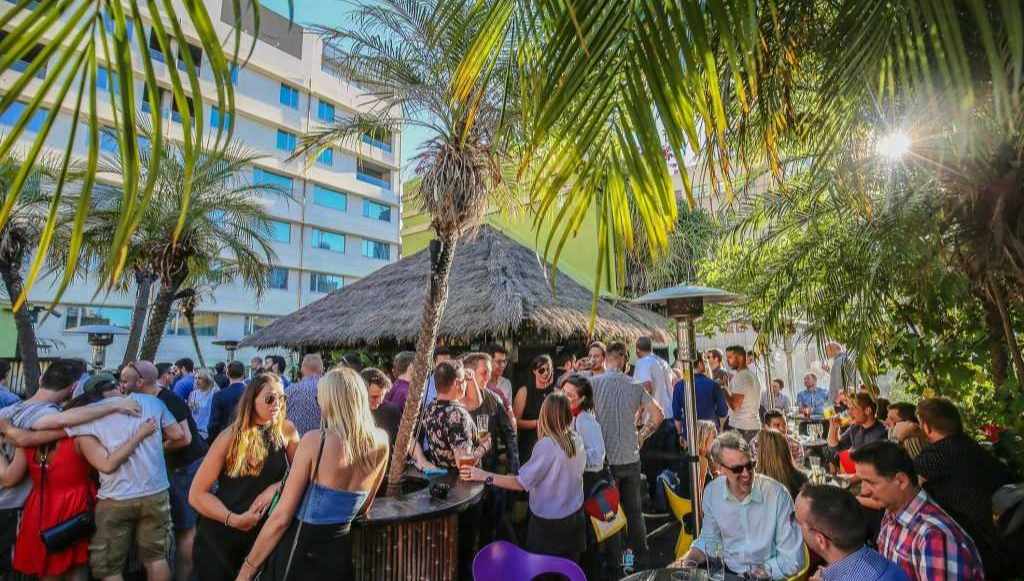 The Palmz at Carlton Club

The warehouse where you can battle zombies

Get off the couch, get your crew together and get into Zero Latency’s virtual-reality games. With a VR headset, backpack and sci-fi- style controller, you’re free to roam a huge warehouse. Battle robots in space, raise the undead in zombie-themed experiences or solve puzzles in an alien world. It’s social gaming taken to the next level.

The record store lurking in a Kensington cafe-bar

Kensington is a suburb on the rise, with lots of cool surprises like White Rabbit Record Bar. This bar-meets-cafe is also a record store, selling secondhand vinyl from rarities to $1 bargains. Whether you drop in to browse the wax or eat and drink, a good record will be playing. DJs often hit the decks on weekends. 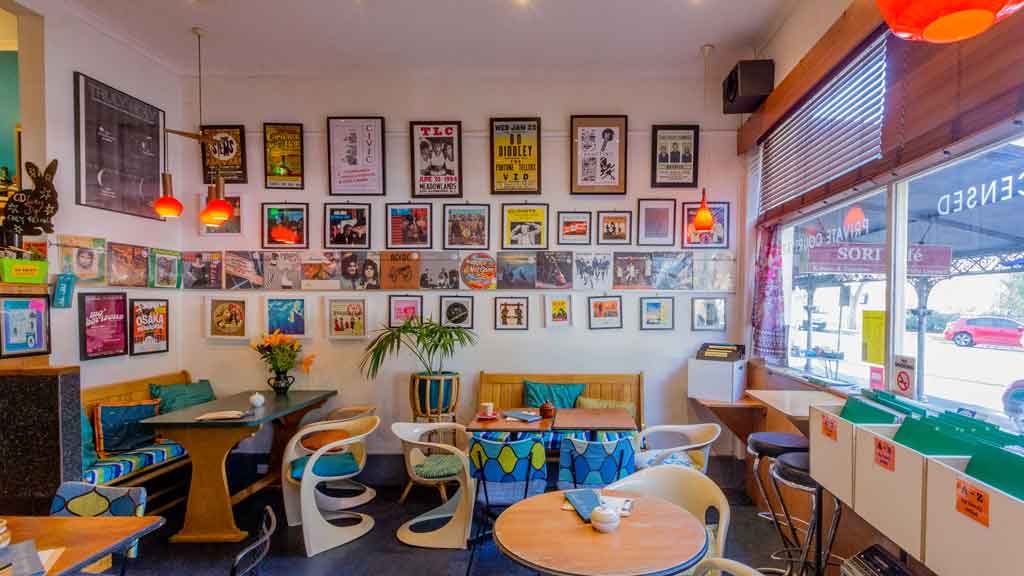 Tarot readings in the Nicholas Building

Another treasure in the Nicholas Building’s warren of creativity is Muses Of Mystery. They offer products for the mystically minded, including tarot readings 5 days a week. See what the cards have in store for you from $60 for 30 minutes. Other gems at this pagan’s paradise include witching herbs, blessing salts, magical jewellery and reiki.

In a hidden alley behind a petrol station, Vertue Coffee Roasters used to have a name even more obscure than its location. Inspired by a handbill promoting London’s first coffee house, it began as The Vertue Of The Coffee Drink. A micro-roaster, cafe, kitchen and retailer, they take their coffee very seriously. And it’s dog friendly! 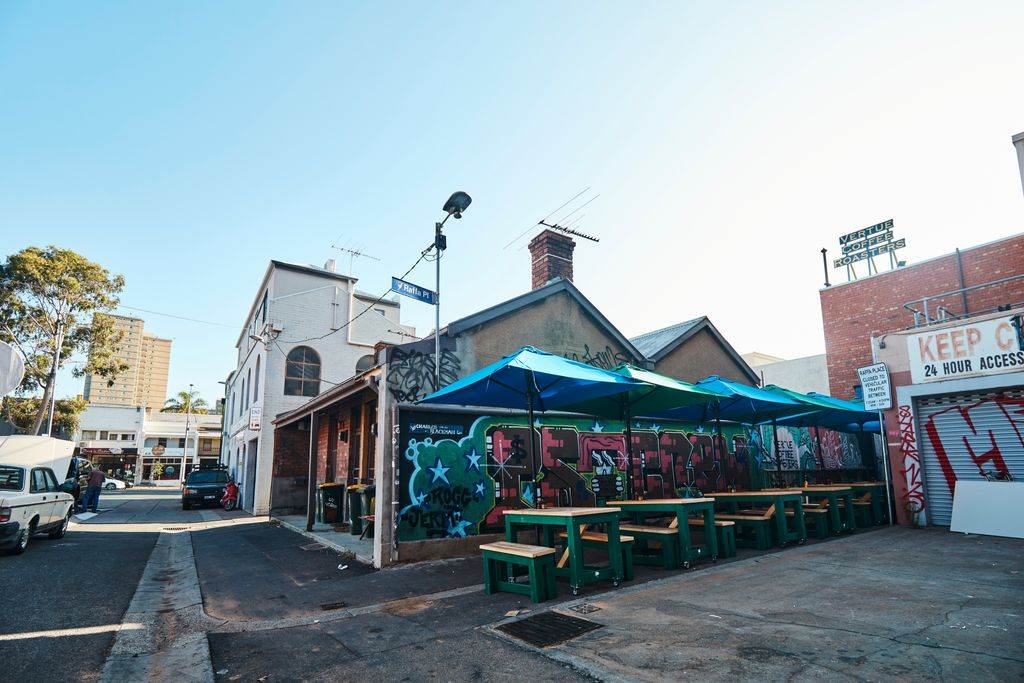 A crooked alley inside a laneway, Presgrave Place is packed with small, quirky street art. Like the pixie-sized red door, with matching window and doormat. Way down at shoe level, it’s easy to miss so keep your eyes peeled! More itty-bitty 3D installations are tucked into this unofficial outdoor gallery. Can you find the other diminutive door, and the hand creeping from a pipe? There’s a mass of framed images too, hung in Victorian-era gallery style.

The vertical garden in Meyers Place

A highlight of eternally cool Meyers Place is the vertical garden planted in 2017. This cascade of green was among the first projects supported by City of Melbourne’s Urban Forest Fund. Sprouting from Loop Project Space & Bar’s wall, up to Loop Roof bar, it really grows on you. Another of its green highlights is Mike Makatron’s lush jungle mural. 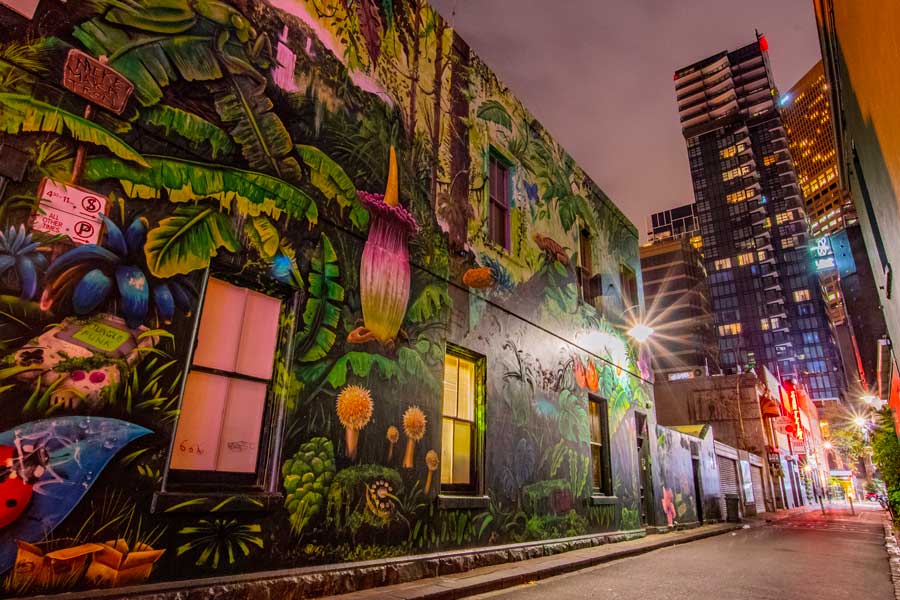 The men’s jewellery shop in an Art Deco building

Lord Coconut hides away in Mitchell House, an elegant 1937 Streamline Moderne Art Deco building. Head up to the fifth floor and discover how bracelets, brooches and necklaces aren’t only for women. The boutique’s other offerings (all made by independent Australian artisans) include rings, tie pins and cufflinks.