Only three things in life are certain – death, taxes, and Melburnians obsessing over the weather. Explore four seasons in one day with a few stunning weather pics of our great city.

This drizzly snap was taken by City of Melbourne’s engineering team in the late 1950s. From a vantage point on the Town Hall balcony, you can spot a sea of umbrellas, vintage cars, quaint trams and pedestrian crossing arrows. Learn more about this classic photo on the City Collection website. 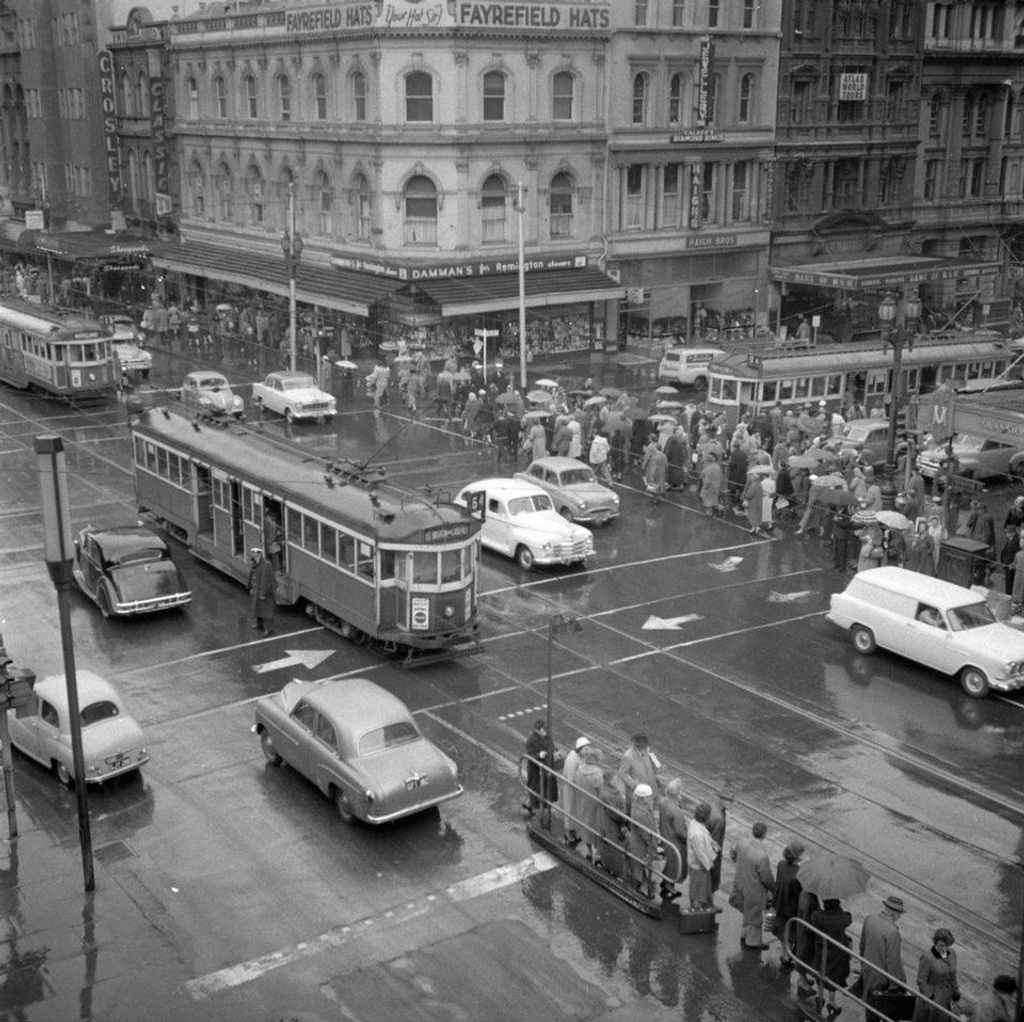 Collins Street in 1956. Photo by the City Collection.

On 8 February 1983, a massive reddish-brown cloud advanced on Melbourne. When the ensuing dust storm landed it dumped 1,000 tonnes of topsoil over the city, uprooted trees and ripped roofs off houses. The storm is so infamous, it has its own Wikipedia page. 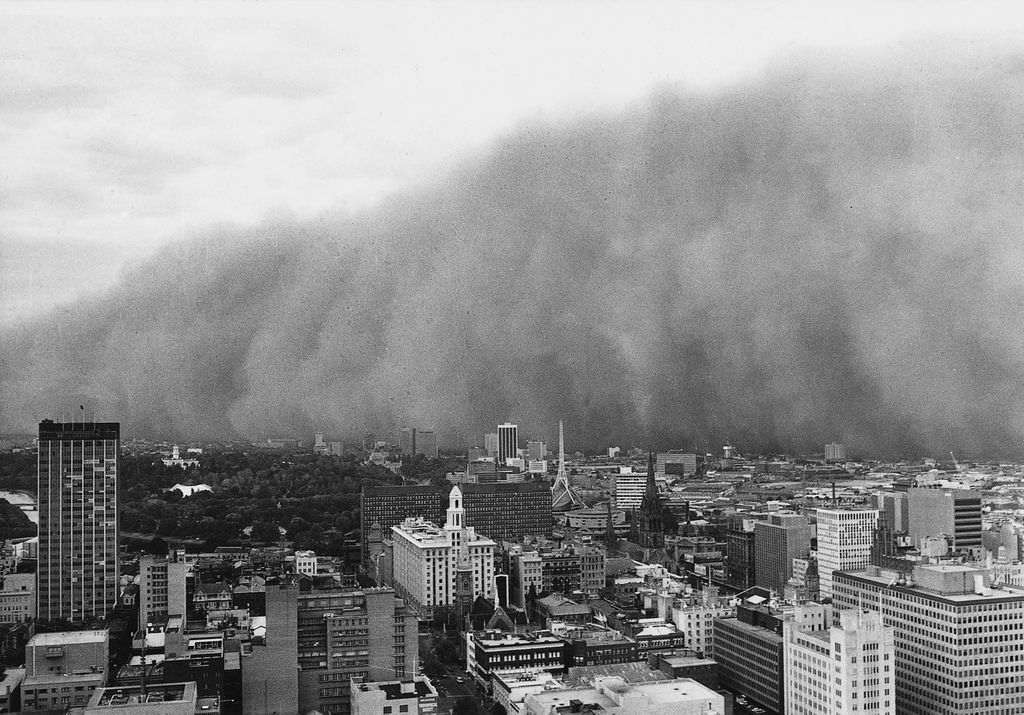 In February of 2015, this spectacular storm cloud filled the summer skies. The storm was so huge a tornado alert was sent out to Shepparton. Luckily though, the day passed tornado free. This image of the cloud was so striking that when it was posted on the City of Melbourne Facebook page, some people couldn’t believe it was real.

A panoramic storm over Melbourne. Photo by City of Melbourne.

Without rain, there’s no rainbows. Flinders Lane is the pot of gold at the end of this stunning snap. Peep distracted pedestrians walking through without noticing the magic behind them. 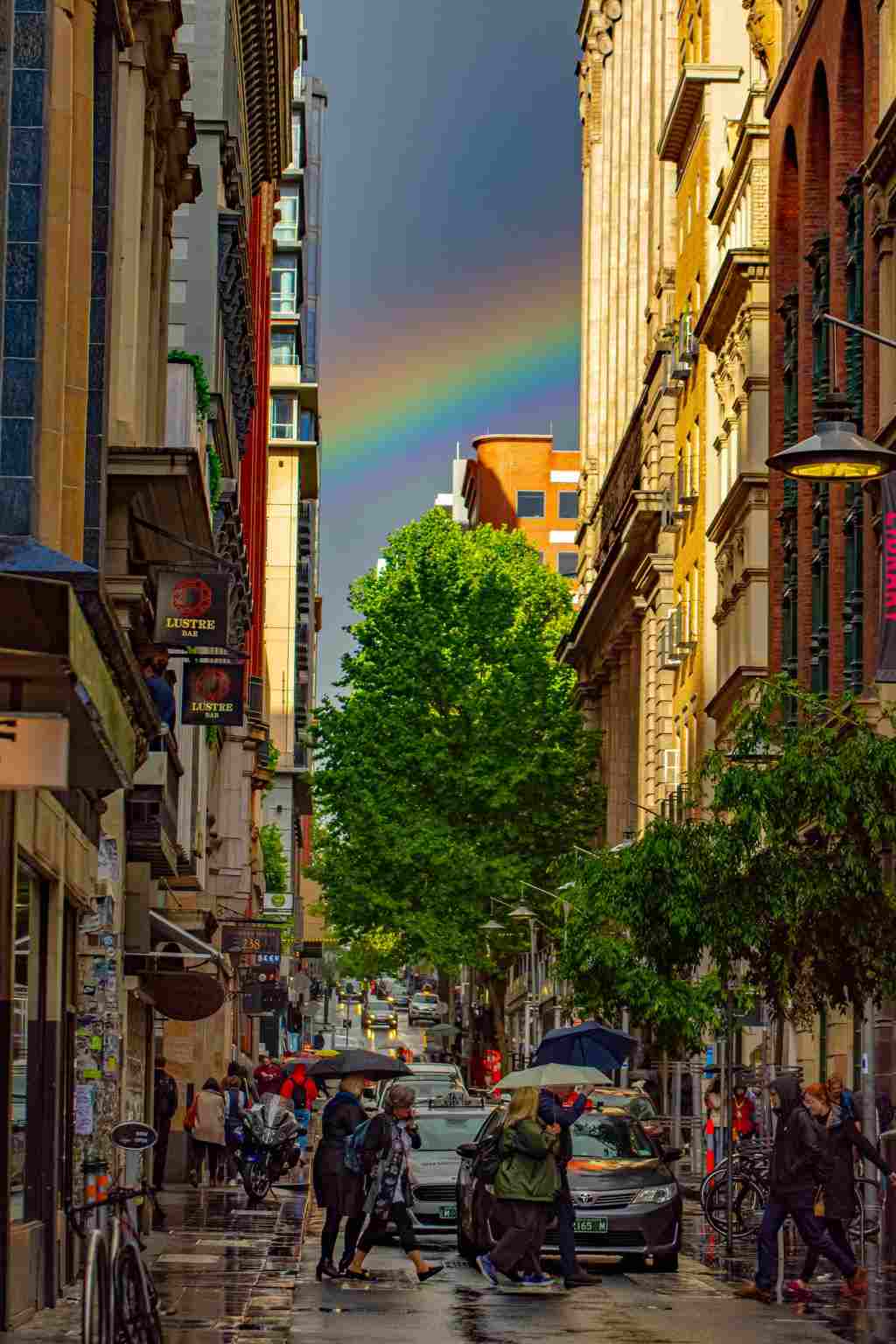 Flinders Lane bathed in rainbow light. Photo by Adam Renyard for What’s On.

The station has low-key Stranger Things upside down vibes in this pic. Snapped by awesome city photographer Adam Renyard, our beloved domed icon takes on a romantic mood-lit sheen. It’s hard to hate the rain when it makes this visage possible. 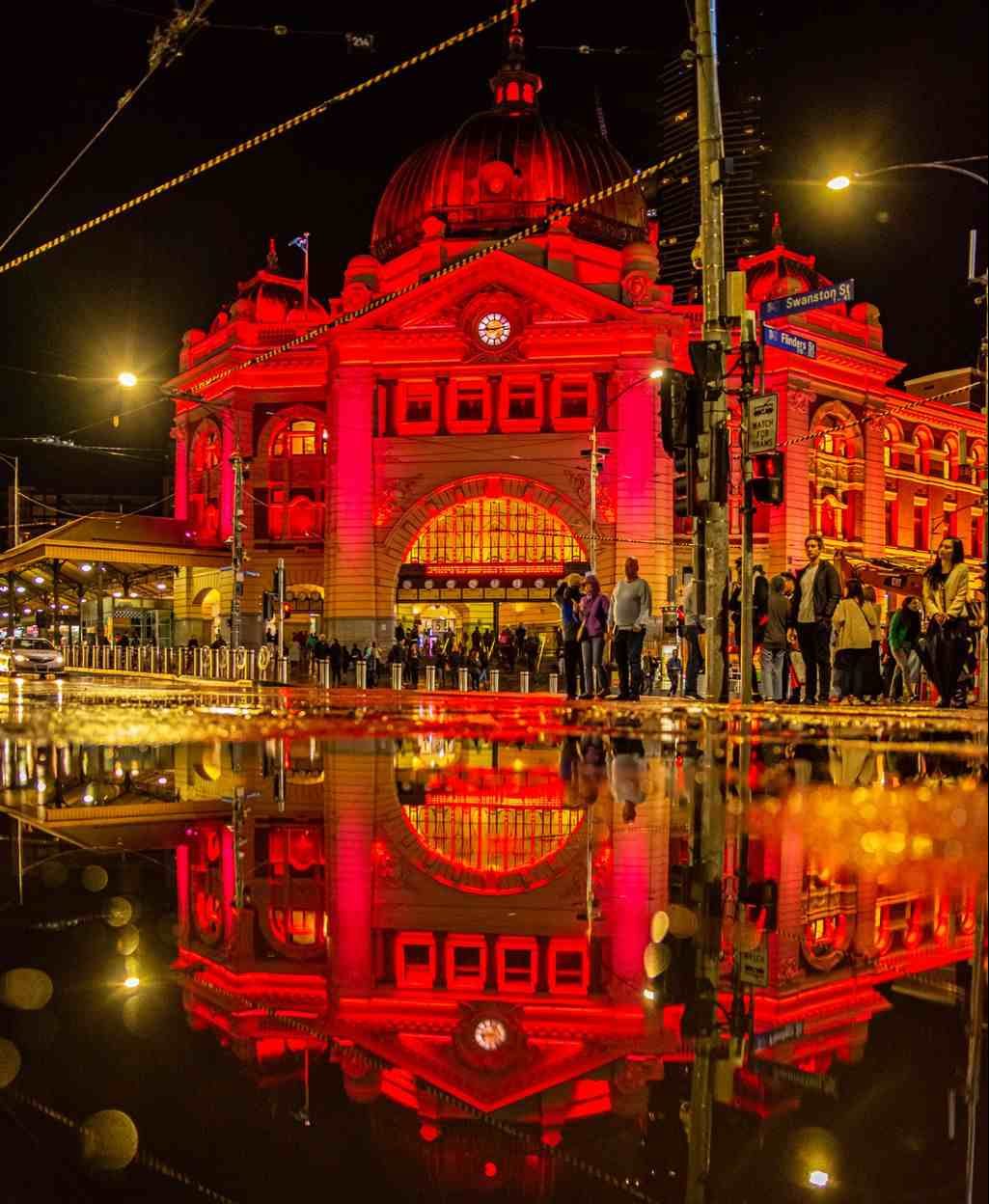 Flinders Street Station mirrored in red. Photo by Adam Renyard for What’s On.

When The Strand lights up at night, it really is a beautiful sight. And after a little rain the colourful neon bounces off the road like a man-made rainbow. This special corner of the city is one to put on your photography list when it’s time to visit the city again. Rain, hail or shine. 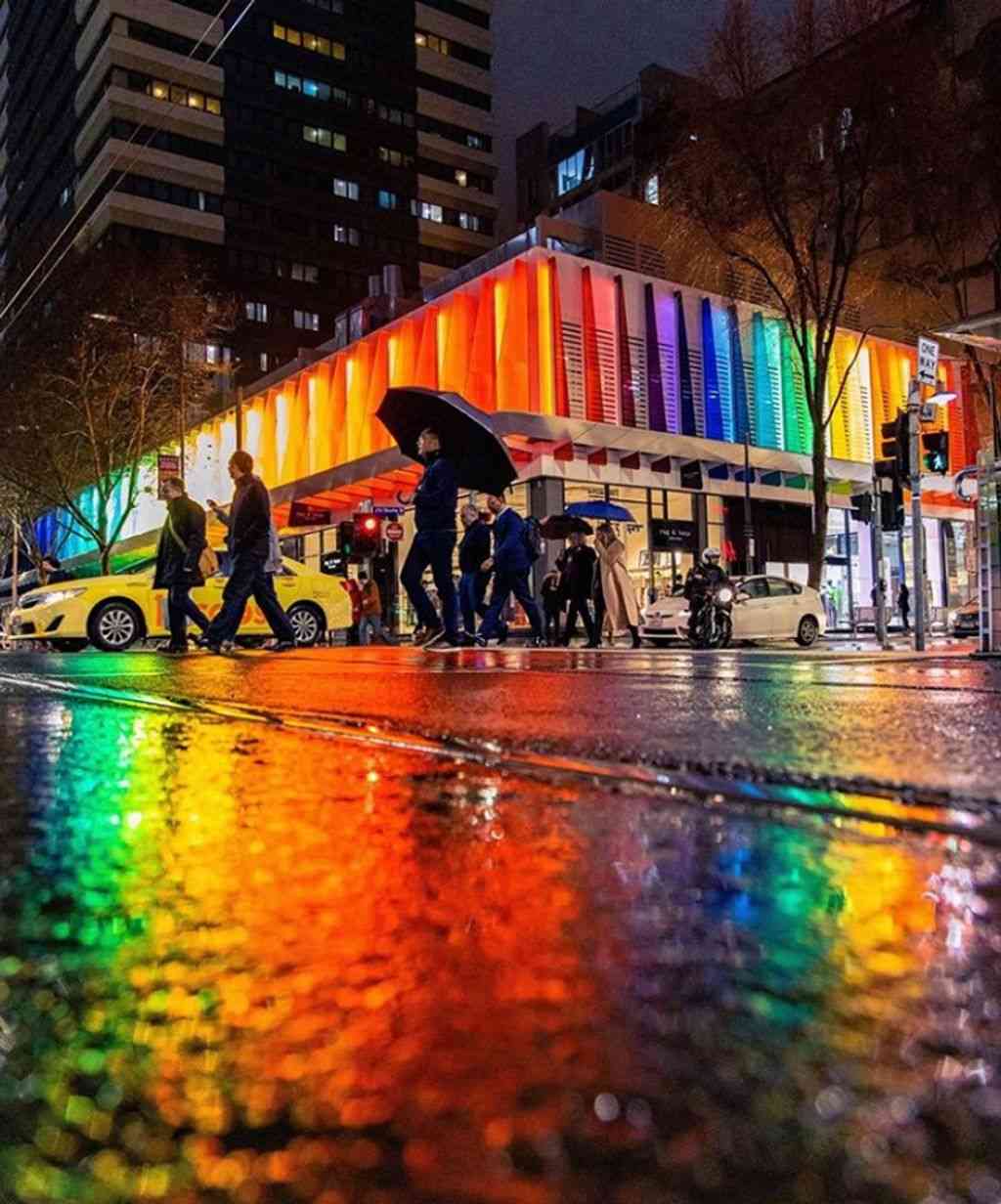 The Strand in the rain. Photo by Adam Renyard for What’s On.

A little proof that the sun always rises, no matter what. This photo was taken between lockdowns on a helicopter ride over the city. From the harbour side to rows of towering skyscrapers, the city is bathed in a refreshing misty morning light. 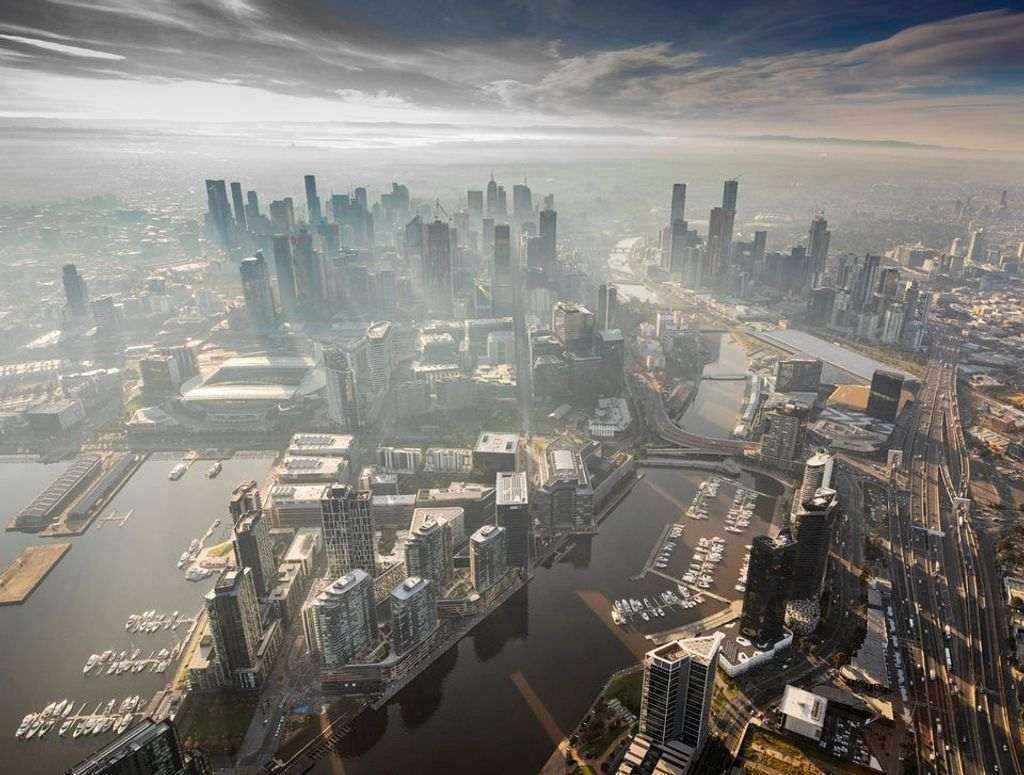 A misty morning shot from a helicopter. Photo by David Hannah for What’s On.

Like these photos? Check out more of our gorgeous gallery blogs.