Heading to the heart of Melbourne for some essential Christmas shopping or indulgent retail therapy? Don’t shop til you drop – rest and refuel at these food courts, which have lots of yummy, affordable options.

Melbourne Central is big so no surprise there’s more than one food court. Get a quick bite from popular chains or Kurimu for Japanese pastries on the lower-ground level before catching a train at Melbourne Central station. Or relax in the second floor’s more spacious food court, which includes pleasant options like Plantation Coffee and Cupcake Central. Ground level’s new Ella precinct (named for the corner of Elizabeth and Lonsdale streets) is even making foodies rethink food courts. A zone inspired by Asian mega train stations’ classy eating, drinking and shopping hubs, it’s about fresh art, music, tech and eateries.

ELLA’s options include neon-lit Sushi Club, Thai at Son In Law The Pad, and pastry prince Pierrick Boyer’s Réverie Cafe & Dessert. Upscale cocktail bar Byrdi has recently opened, and there’s more to come. Like the city centre’s third Pho Nom outlet, which opens with later hours and expanded dinner options than its siblings. So whichever of the 300-plus Melbourne Central retailers you’re checking out, like Sephora, Mimco or Milligram for beautiful stationery, there’s no need to go hungry. 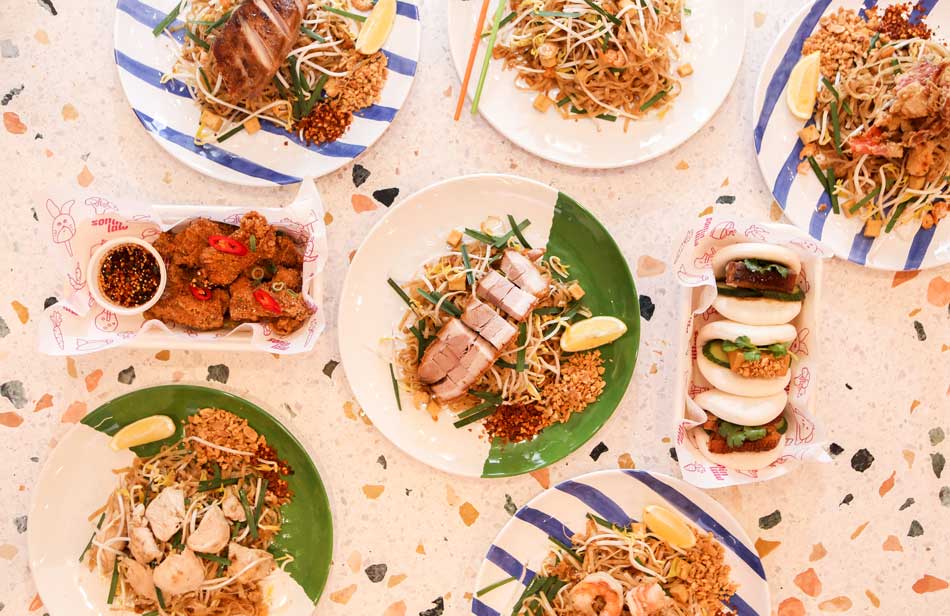 Son in Law at Ella

This vertical village includes laneways and a central piazza, where you’ll find eateries such as Hong Kong-style Shophouse Kitchen and Okinawa-inspired Aqua S soft-serve. If you just want to eat well and get on with things though, head for QV’s main, ground-level food court. It’s got a buzzing basement feel, with independents and smaller chains like Dragon Hot Pot, Earl Canteen and Souperman Cafe for lunchtime staples including soups and paninis. Need an afternoon pick-me-up? Try Mrs Fields’ cookies, cakes, muffins and brownies. QV’s eclectic retailers include Aesop, Lupicia Fresh Tea shop and Universal Store for streetwise fashion. 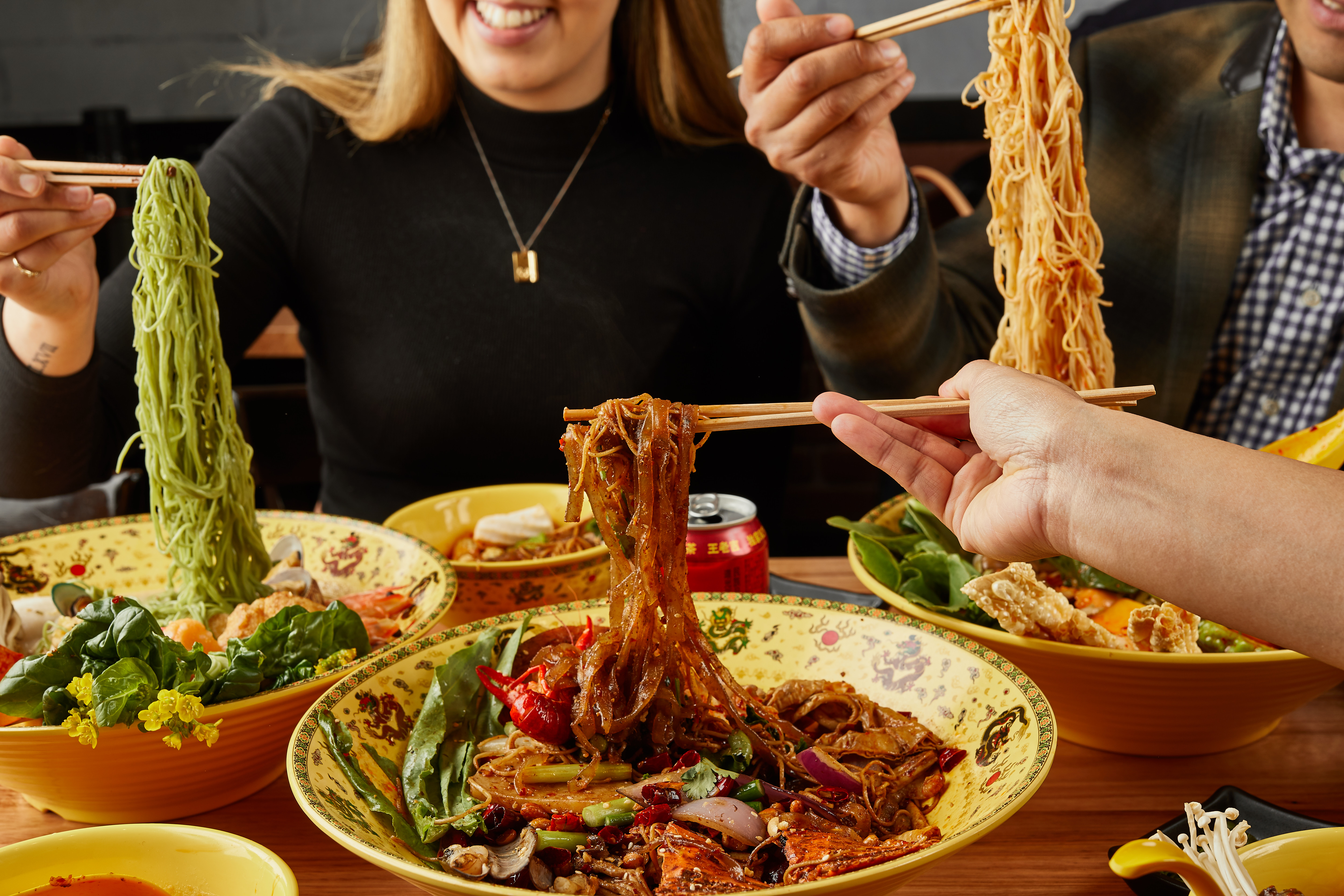 This shiny shopping centre is blessed with stylish stores like Ted Baker of London, Uniqlo and luxury Danish jeweller and homeware designer Georg Jensen. Emporium Melbourne’s food courts are similarly smart. There’s a smaller selection of on-trend eateries like Pho Nom and Botica cafe gathered on the lower-ground level. Or glide up the escalators to level three for a food court that’s bordering on glamorous with big windows, natural wood and artful lighting. There are about 30 eateries here, including New Shanghai, Tank Fish and Chippery and Melbourne Malaysian legend Chinta Ria Soul. 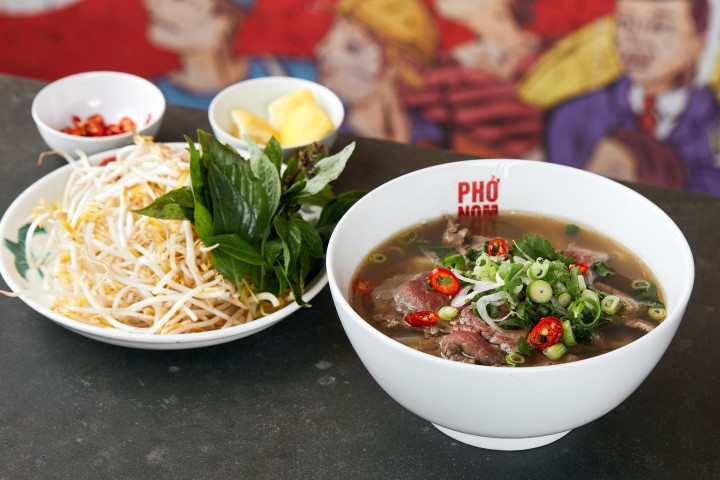 On the corner of Elizabeth and Bourke streets, Galleria is a smaller boutique arcade which may have slipped under your radar. From The North Face to The Teddy Bear Shop, there’s something to tempt most shoppers though. Plus, if you can resist Belle’s Hot Chicken on street level next to the escalator, enjoy the atrium food court above that’s among the nicest in town. This airy space has big windows, a glass ceiling, comfy banquettes and unique light fittings. There’s a generous handful of eateries including Bread Sandwich Bar, Kebabworld and Crema Caffe for coffee and snacks, from morning toast to late-afternoon cake. 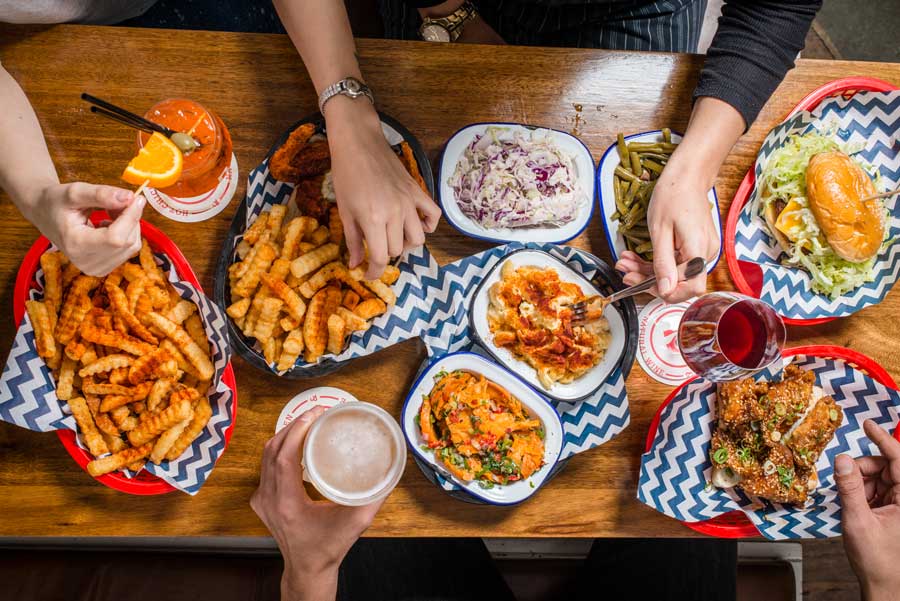 Tucked away in the basement of this shopping centre and serviced-apartment complex is a food court inspired by Asia’s bustling dining halls. So after checking out The Paramount’s shops, like Happy Town Korean, which specialises in K-pop albums and merchandise, choose from a feast of inexpensive eateries. Maybe Chine Express, Hokkaido Bento, Moo Tea or Asia Unique, which has a huge menu and is open until 10pm every night. There are also some western-style options in this indoor courtyard, including Dmarco Espresso Bar.

One of the world’s largest public markets, this place can keep you busy for hours. So whether you’re shopping for fresh produce and gourmet groceries or everything from bags and books to bakeware, be sure to take a break. There are some great bites to go in the Dairy Produce Hall, but seating just outside on Therry Street is limited.

A better bet is at Queen Victoria Market’s natural-light-filled food court, where you can ponder the colourful mural of Australian entertainers like Kylie and Joan Sutherland. There aren’t a lot of eateries to choose from but they’re big on flavour – especially Drums Cafe, which does generous Sri Lankan combos. Other options include Funk Fish, porchetta specialists Q75 and El Ricon, a handsomely tiled Spanish tapas bar hidden in the corner of this unusual triangular-shaped food court. Don’t forget to some hot jam doughnuts at American Doughnuts on your way out! 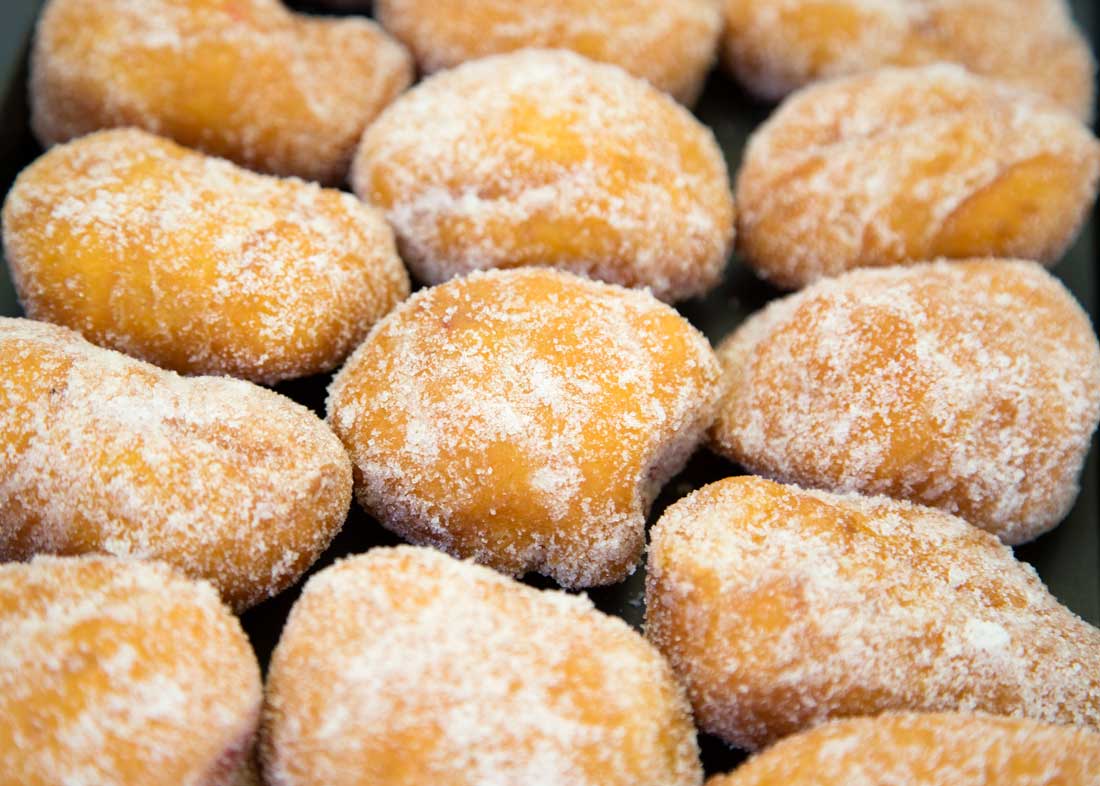